Highly successful First Show of the Year, held in the Virginia Show Centre 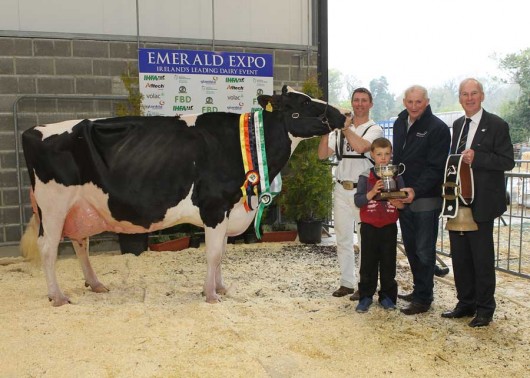 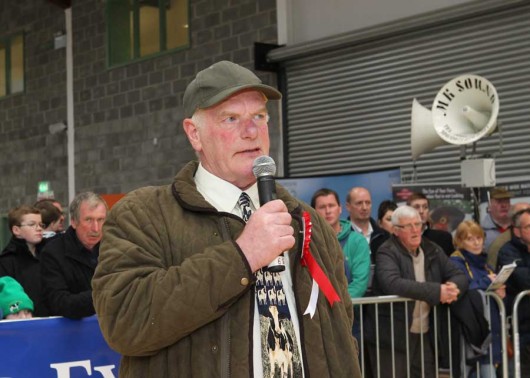 The skies overflowed with rain on the morning of the Show in stark contrast to the sunny conditions of previous days resulting in the judging ring being moved indoors within the Virginia Showgrounds Centre. For exhibitors, and spectators alike it proved a popular move with a cosy atmosphere enveloping the Emerald Expo 2016. Co-operation and team work made short shift of the necessary adjustments and Judge Dennis Smith was quickly into his stride with the calf classes getting the show underway close to noon.

Now in its sixth year the Emerald Expo in association with IHFA and key sponsors Glanbia, Alltech, FBD. Volac were sponsors of the YMA Showmanship League Classes. Lakeland Dairies and the farm organisations IFA & ICMSA and the Department of Agriculture, Food & the Marine also supported the Show. The impressive, new Virginia Show Centre was the venue for the first time with many commenting on the fine facilities provided by this new community-led development. Many of those attending made reference to the link with a previous era when Cavan hosted Expo in earlier times. 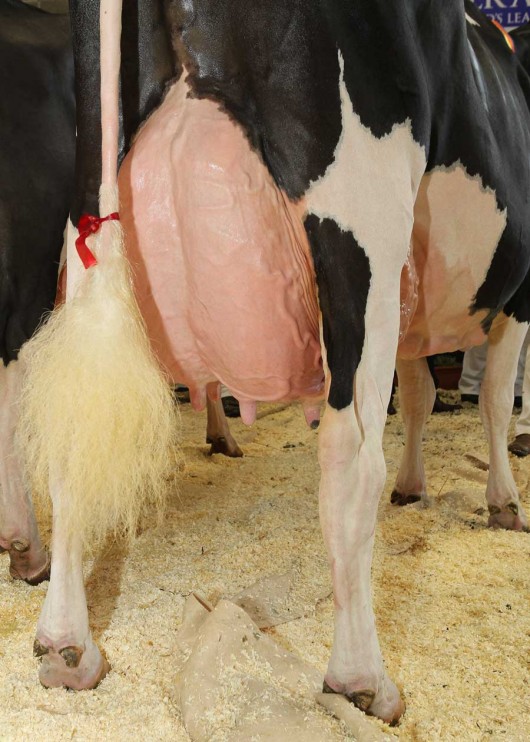 Best Udder of the Show

The Glanbia Senior Cow Championship was won by Philip and Linda Jones Hallow with their cow Hallow Advent Twizzle 3 ET. She was also the Exhibitor Bred Champion and Best Udder of the Show. Judge Smith was fulsome in his praise for this 8-year-old who was placed first in the Mature Cow class, remarking on her power, femininity and balance with a picture-perfect udder. Sired by “Advent” and with an EX95 Dam, Twizzle 3 was Honourable Mention and winner of the Production class at Emerald Expo last year. She recently was crowned Reserve Holstein and Reserve Interbreed Champion at the R.U.A.S. Winter Fair. Classified EX95 on conformation she is also a tremendous production cow with over 6,100 kgs of milk solids produced in five lactations to date. Reserve Champion went to Monamore Seavers Iris exhibited by James Kelly, winner of the 4-year old cow-in-milk class. Honourable mention went to Mike Magan’s Bunacloy V-B Doorman Alioli ET Intermediate Champion and winner of the Junior 2 year-old class, she calved-in three months ago.

Other cows featuring in the Championship line-up included; John & Garry Hurley’s Clonpaddin Windbrook Fame 2 ET, Evergrange CF Sharon, winner of the Junior 3 year-old class, exhibited by Mervyn Eager, Michael Freeney’s Glaslough Uno Elizabeth, Drumlina Atwood Megan, winner of the Senior 3 year-old, exhibited by Boyd/O’Neill/Timlin/Moore, Hallow Attic Christina exhibited by Philip & Linda Jones and Mike Magan’s Bunacloy Windbrook Tipsy. Judge Smith described his line-up as a wonderful spectacle and testament to the longevity and productivity of Holstein Friesian breeding. He noted that this line-up was a tremendous advertisement of Irish cows and remarked that it would rank within the top echelons world-wide. 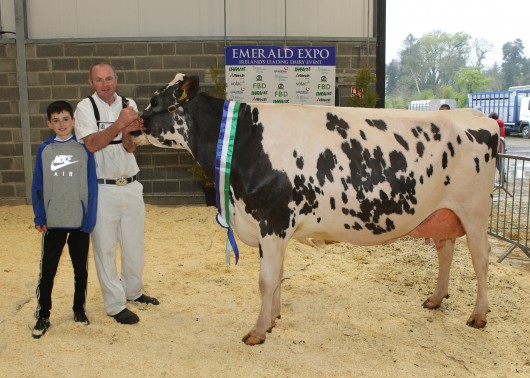 An EBI Championship was a new iniatitive introduced this year where the highest EBI animals in every class competed in a judging class for an overall Championship. Monamore PNH Darlene 1 ET exhibited by James Kelly was tapped out as Champion, with Alan Dorian on the halter. Darlene is currently in her sixth lactation with a lifetime production to date of 72,000 kgs milk and 5,200 kgs Milk Solids. She is classified EX94 4E and her dam Monamore Darlene 30 EX94 6E, by Rudolph, was a very influential member of the Monamore herd. Reserve Champion went to Clongowes Sid Almeric exhibited by Bryan O’ Connor, Bawnmore herd, Kanturk Co. Cork. IHFA were sponsors of this new class. 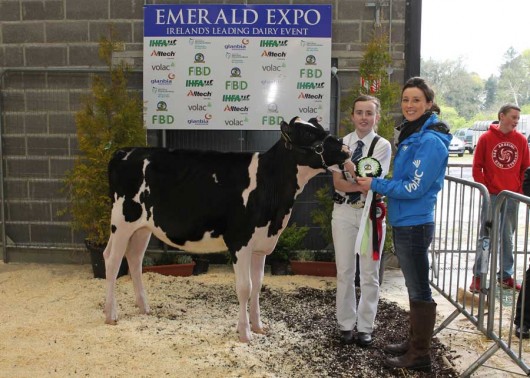 The Young Members were to the fore with three Showmanship League classes. Rachel Corley from Smithboro, Monaghan was Champion Handler with brother and sister Jamie and Hollie Keenan, Threemilehouse, Monaghan taking Reserve Champion and Honourable Mention respectively. Young Members of the local Breffni Oriel club had a strong showing with also young members from across surrounding clubs.

The list of trade exhibitors included Animax, Dovea, Alltech, Progressive Genetics, Packo Fullwood and World Wide Sires. Dr. Vanessa Woods, Agri Aware C.E. was also in attendance. Matt O’ Keeffe carried out MC duties admirably. Mr Henry Corbally, Glanbia Chairman, officially opened the Show. Judge Dennis Smith said that it was a thrill for him to be invited to judge Emerald Expo. He was making a return journey to Ireland having previously judged the National Dairy Show, Millstreet, the Baileys Champion cow and also twice judged the Charleville Show amongst others. Farming in the UK’s south west county of Devon, Denis manages the highly renowned Oakroyal herd of pedigree registered Holsteins. Oakroyal is synonymous with the top echelons of UK breeding having previously been awarded Honourable Mention in the Holstein UK Society Premier Pedigree Registered herds competition. On the day he was ably assisted by ring steward Dessie Dunleavy. YMA member Megan Boal helped with the presentation of rosettes. Visitors from near and far were in attendance with a substantial contingent travelling from Northern Ireland. 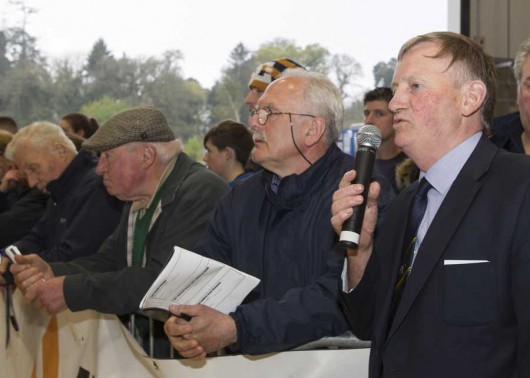 C.E. Charles Gallagher presented the Exhibitor Bred Champion title to Philip Jones for Hallow Advent Twizzle with Glanbia Chairman Henry Corbally presenting the Seamus Kelly perpetual trophy. Richard Whelan, Show Co-Ordinator thanked all exhibitors, sponsors and those in attendance for their support of the Show. He complimented the new Virginia Showgrounds and Centre, thanked C.E. Charles Gallagher and IHFA staff, praised the input and assistance of Patrick Gaynor & family and thanked the ring & cattle stewards and members of the organising committee.