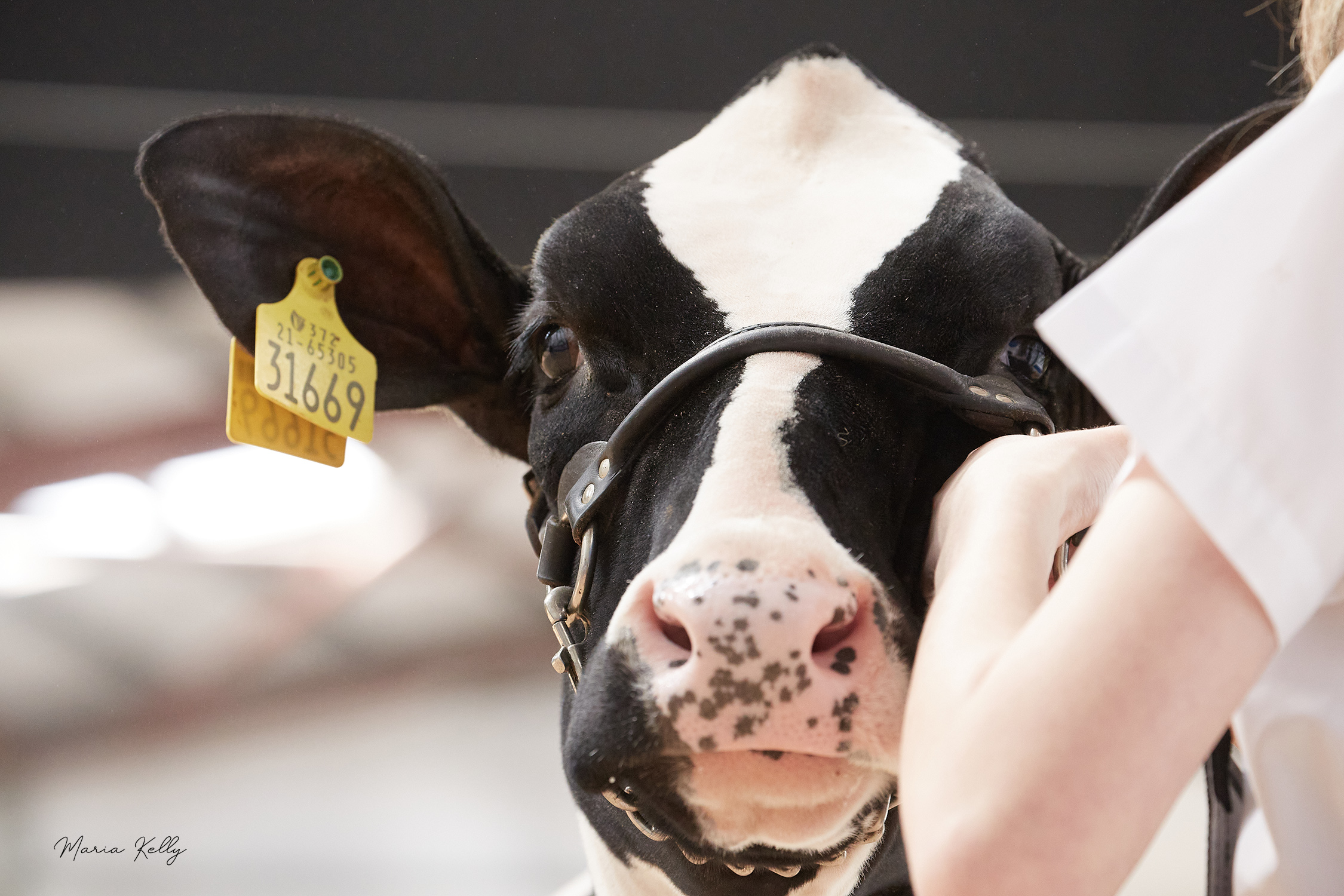 Emerald Expo, Ireland’s Spring all breeds dairy cattle show, returned to action on Saturday April 23rd last. It was the first dairy show to take place in person for over two and a half years.

The general comments expressed by all in attendance was that “It was great to be back in person” – to meet up and renew acquaintances after such a long time of a Covid enforced void. The atmosphere was very pleasant and cordial.

The Virginia Show Centre, Co. Cavan, was the venue and the programme of events included six Championships, classes for YMA handlers, other dairy breeds, youngstock classes and in milk classes. The total prize fund on offer exceeded €28,000.

A demo on handling skills and reason giving was held for the benefit of Young Members and the show also included an open stock judging on a class of senior cows to encourage participation and engagement by the audience in attendance. To help with promotion, the show was live streamed online right throughout the day. Viewers watching included members at home and as far away as Australia! 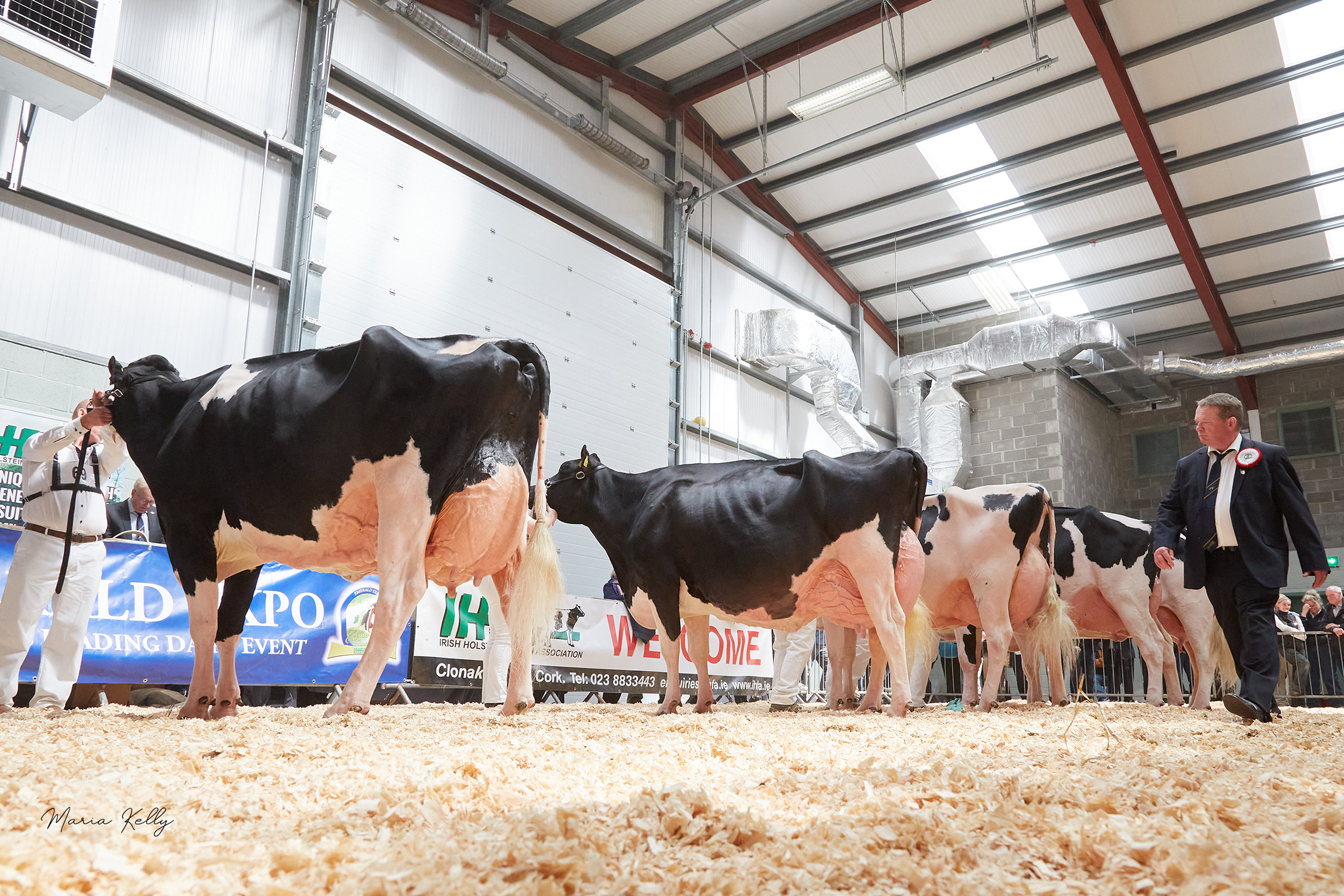 Emerald Expo Senior Champion was won by Clonpaddin G Fame exhibited by John and Cyril Dowling, Baldonnel herd. She also won the award for best udder of show and was 1st Mature Cow. The judge complimented her “fantastic body with an udder that is truly superb”.

Her quality is even more admirable given that she is now in her eighth lactation, a testament to functionality and longevity. She is classified EX95 5E on conformation with a score of EX97 for rump composite.

She is a tremendous production cow having yielded over 10,000kgs milk in six consecutive lactations to date. Her milk solids yield in these six lactations has averaged 850kgs milk solids/lactation. Her showing accolades includes Supreme Champion, National Dairy Show 2017.

Four weeks fresh in her second lactation the judge praised her “beautiful dairyness and strength”. Classified VG86 2-year-old with a VG88 mammary, she is a ninth generation VG/EX dam. As a heifer she recorded 11,900kgs milk, 819kgs milk solids (322 days). Her EX91 3E dam and EX92 3E grand dam both recorded protein percentages over 3.60%.

In his comments the judge commended her as “A beautifully balanced heifer, so clean and dairy throughout.”

Calved over four months, she classified VG87 on conformation as a 2-year-old with a VG87 mammary just one week fresh into her first lactation. Her dam won Senior Champion Tullamore National Livestock Show in 2016. 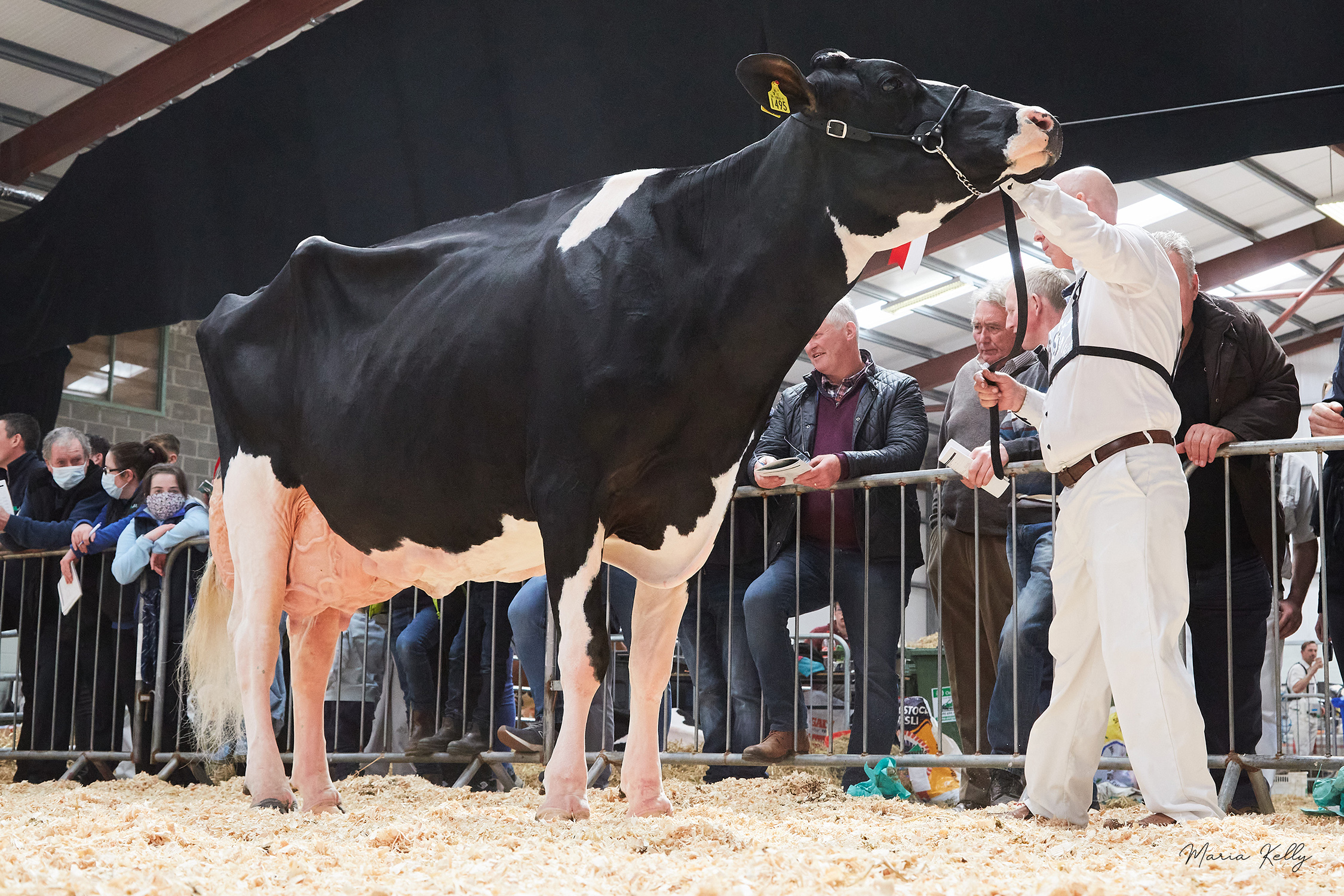 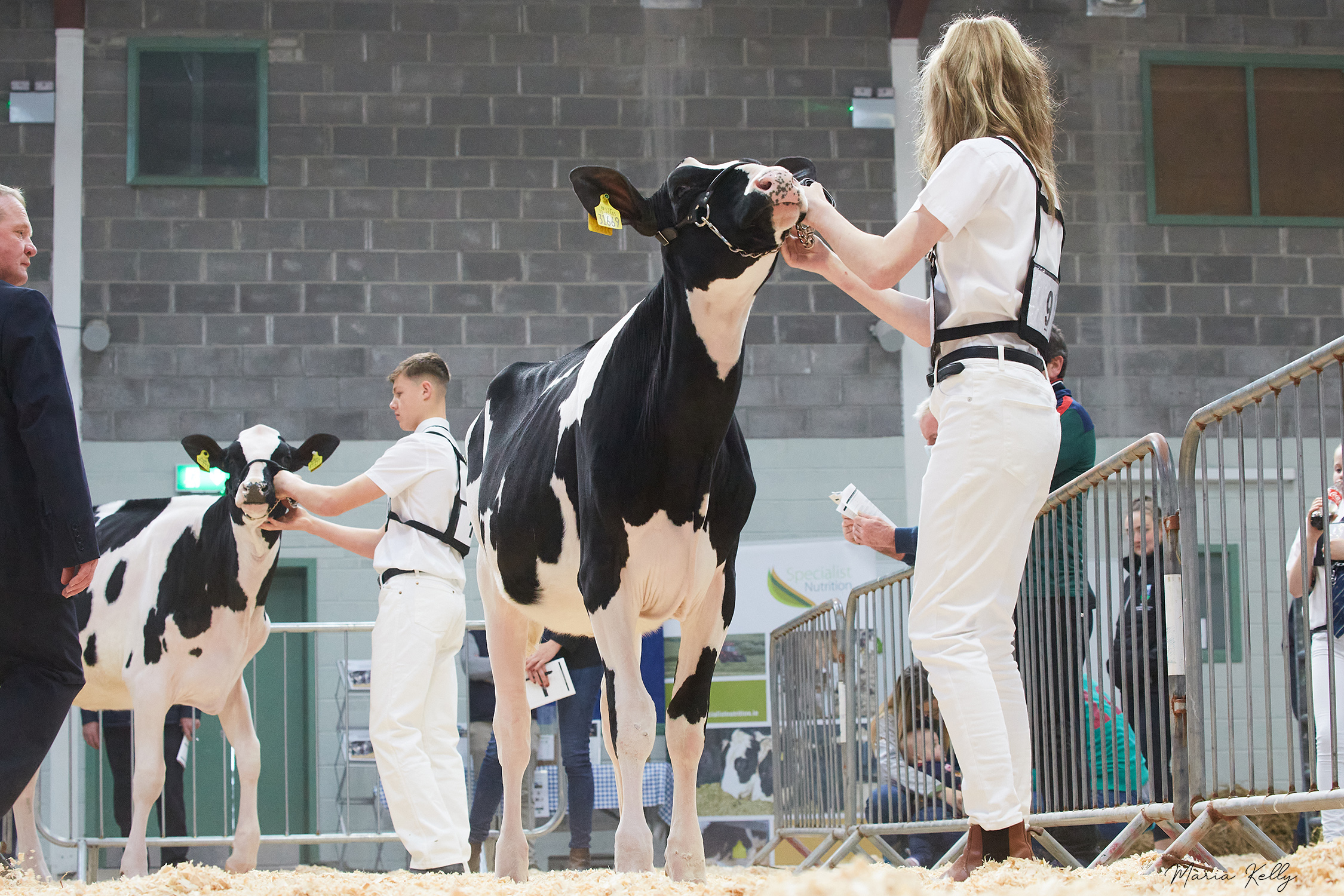 The Young Members Association (YMA) made a welcome return to active participation with three handling classes held at the beginning of the show. YMA participants on the day ranged in age from ten years old up to senior.

The future looks bright with such talented and enthusiastic young members participating and coming through. Special vouchers towards clipping equipment sponsored by IHFA were presented to the top handlers in the Handler Championship. 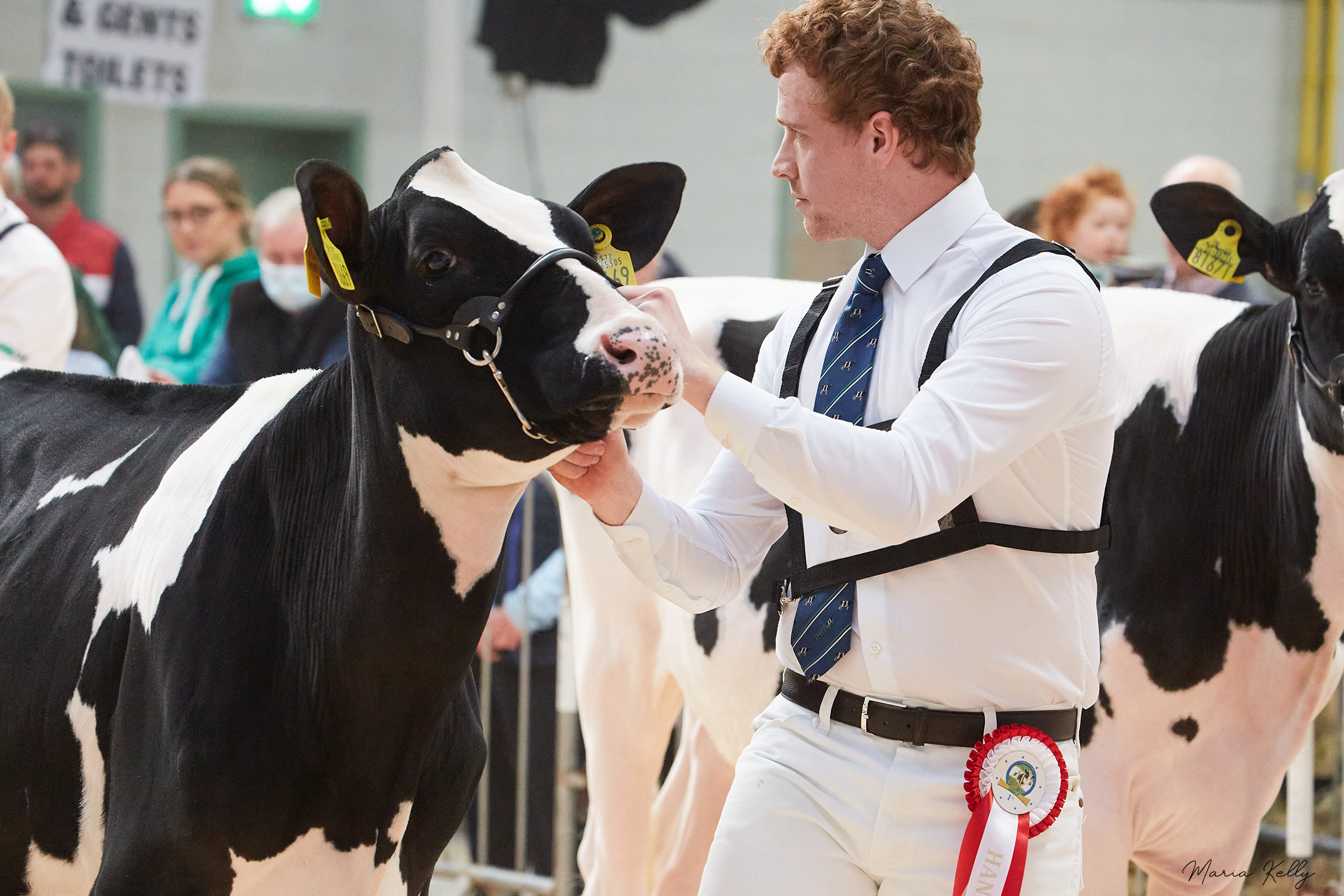 Richard Whelan, Emerald Expo Show Director, opened proceedings by welcoming all in attendance and he thanked all sponsors involved for their support.

Title sponsor is FBD Insurance. Main sponsors are IHFA, Glanbia and the Department of Agriculture Food & the Marine. He thanked the Emerald Expo organising committee and the Virginia Show Centre committee for the superb facility.

Richard said that Emerald Expo marked a return as the first show of the year, and it gives everyone a lift to be able to meet up once again with fellow breeders and to be back exhibiting stock following the pandemic-induced hiatus of two and a half years.

He thanked all exhibitors who had turned out a superb line up of top-quality stock. He noted that exhibitors taking part had travelled from near and far with a broad spectrum of counties represented including Donegal, Cork, Wexford, Galway, Carlow, Monaghan and Wicklow to mention a few.

Richard welcomed all viewers watching the live streaming of the show. He thanked the cattle stewards and all those helping out on the day. 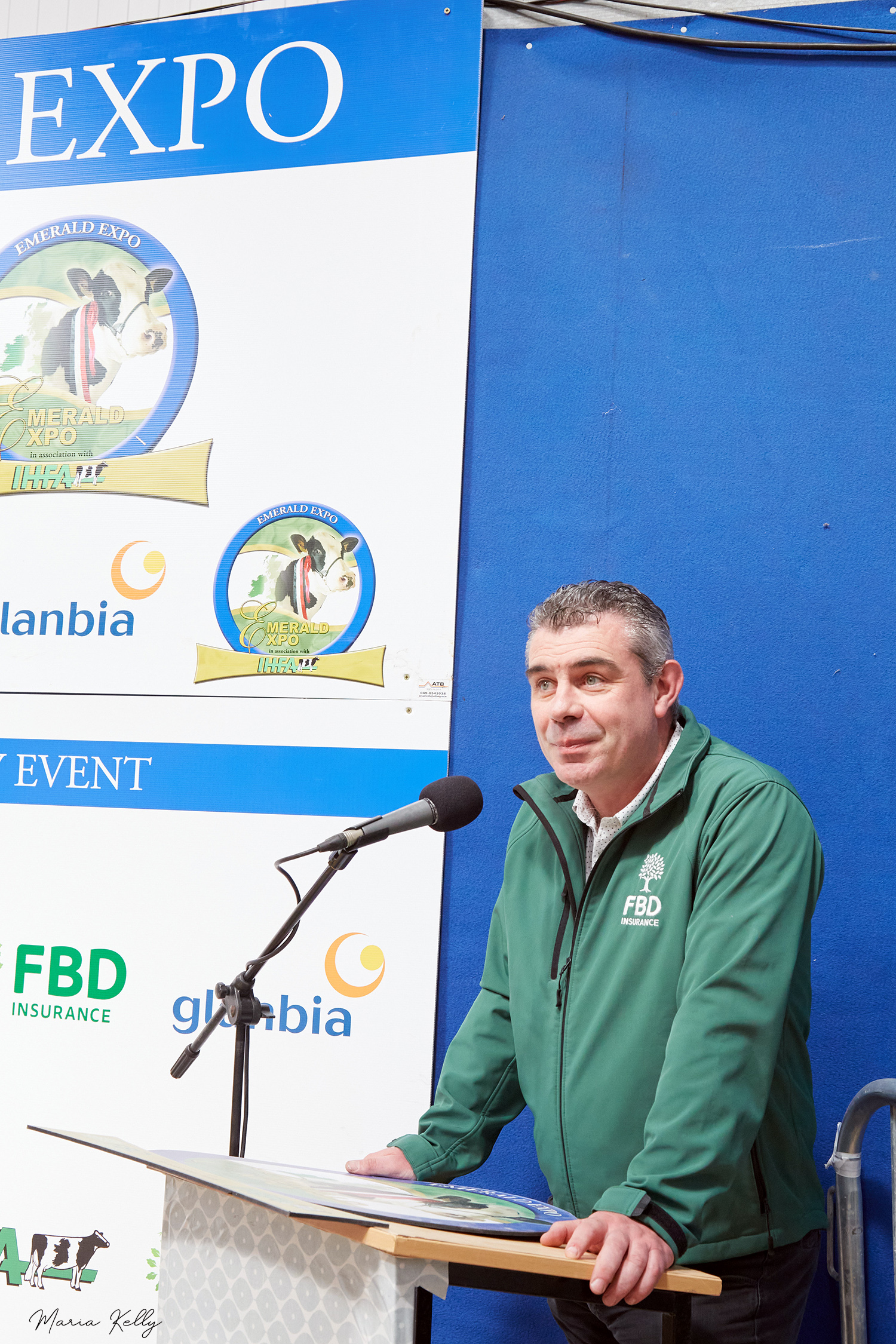 Conor McGovern, FBD Cavan Branch Manager, performed the official opening. In his comments he wished all exhibitors every success on the day, and he welcomed all in attendance. Conor said that continuing good relations and the fostering of a strong association with IHFA families is a strong ethos of FBD. 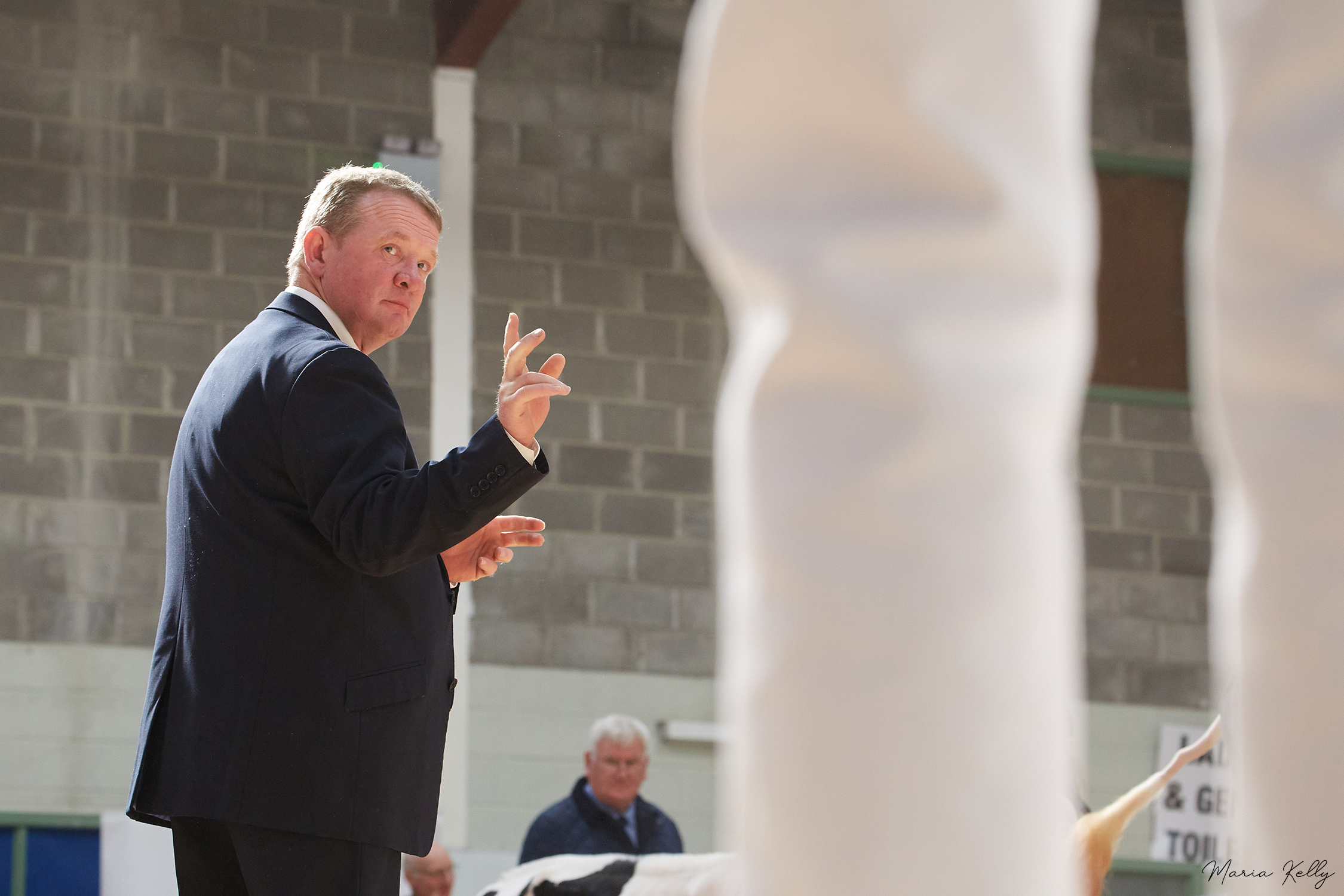 The judge was Paul Hannan, Lisnalty herd. He is a member of the European Holstein & Red Holstein Confederation (EHRC) Judges Panel. Paul’s showing achievements and successes include exhibiting the Supreme Champion at the National Dairy Show and Supreme Interbreed Champion at the RUAS Winter Fair.

The Senior Championship was brim-full with quality and included the following; 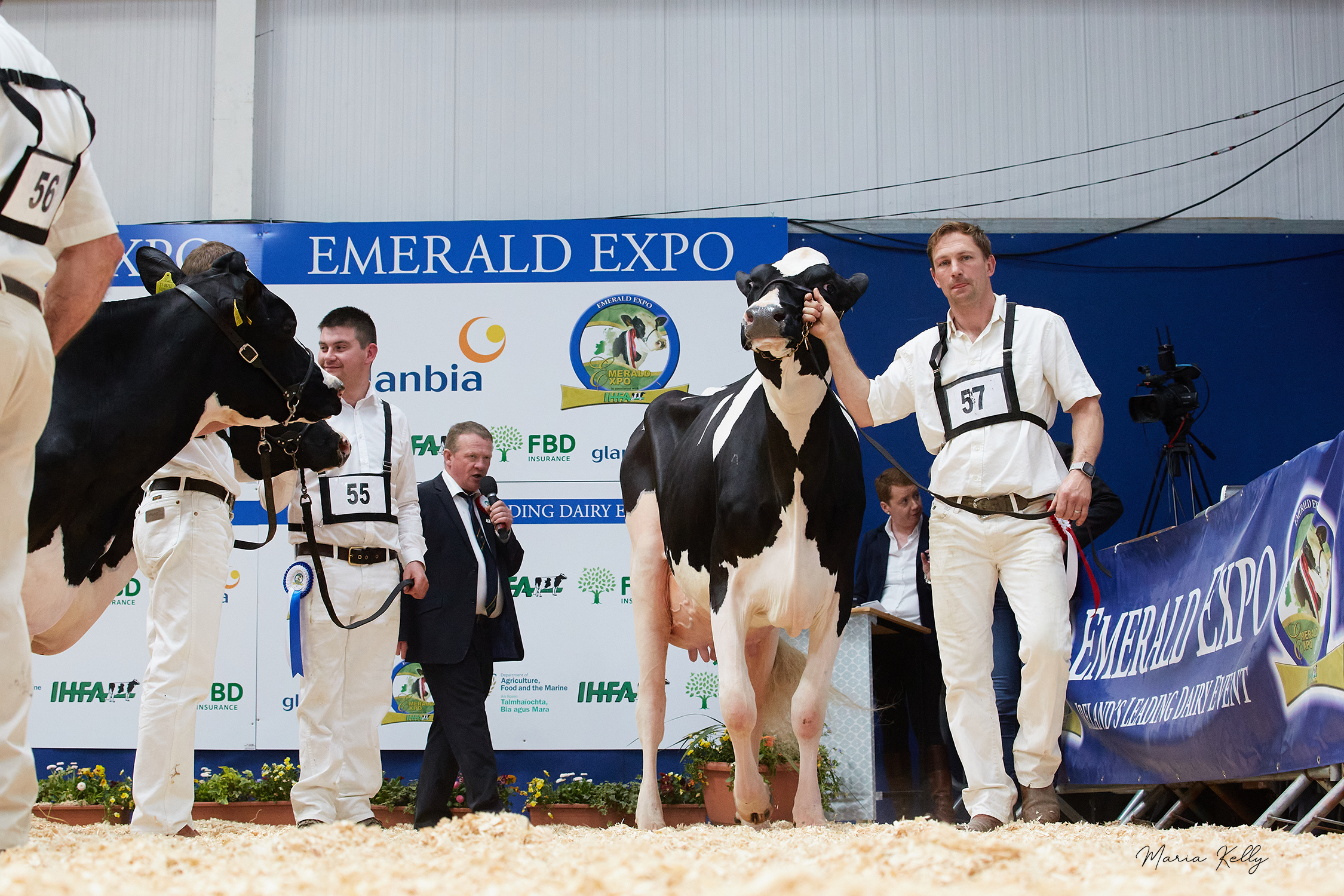 An award to the highest EBI animal in each Holstein Friesian class was presented culminating in an EBI class, judged on Conformation, where each individual highest EBI award winner competed in a dedicated class prior to the Senior Championship. 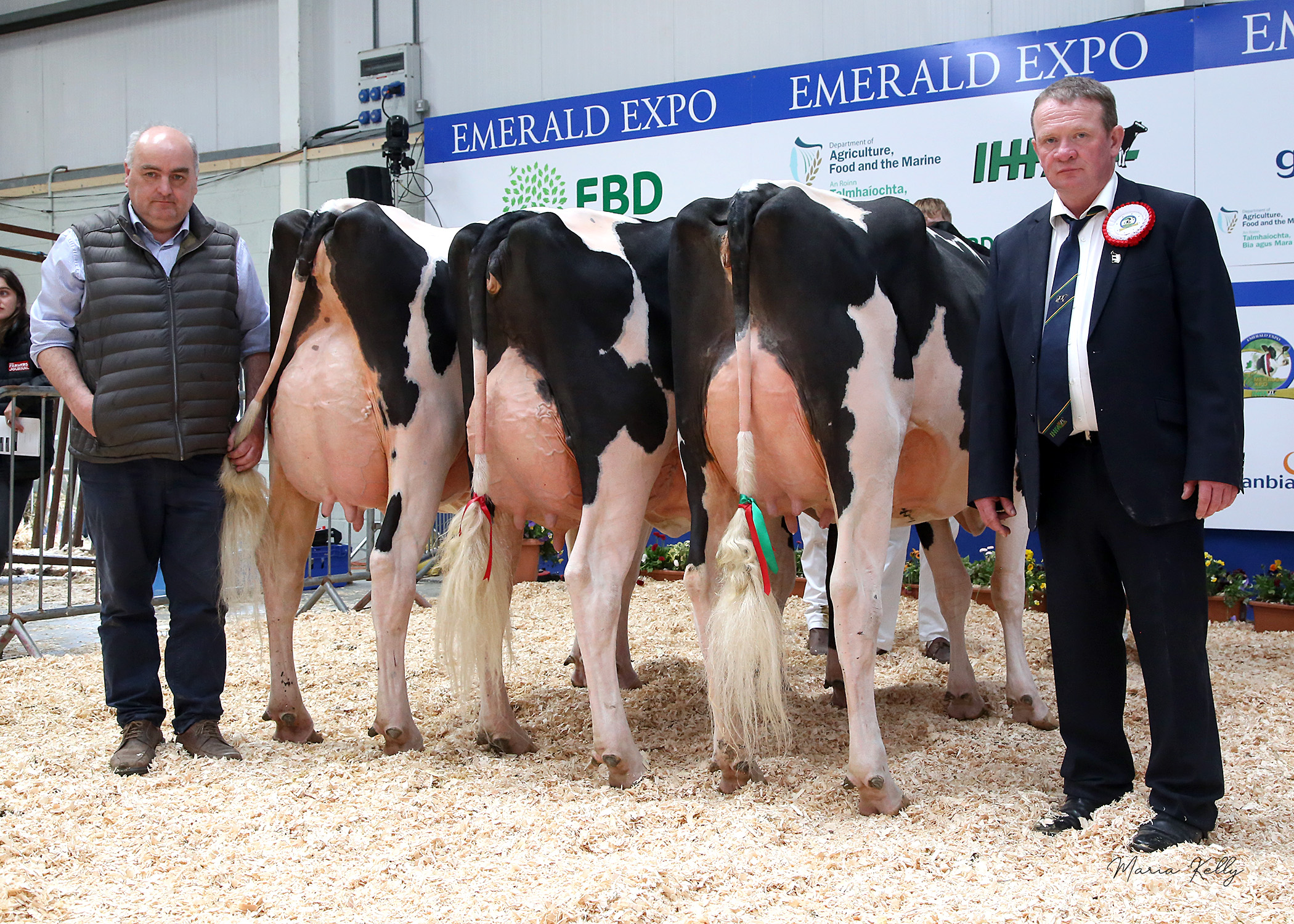 John O’Connor, from Coolageela, Kanturk in North Cork, won the Best Group of Three Females Owned by Exhibitor class. It bolstered the success for this newly established herd at Emerald Expo, adding to an impressive haul of achievements on the day. It was a great success for John and his team whose commitment to the show included a round-trip journey from home totalling 530kms. 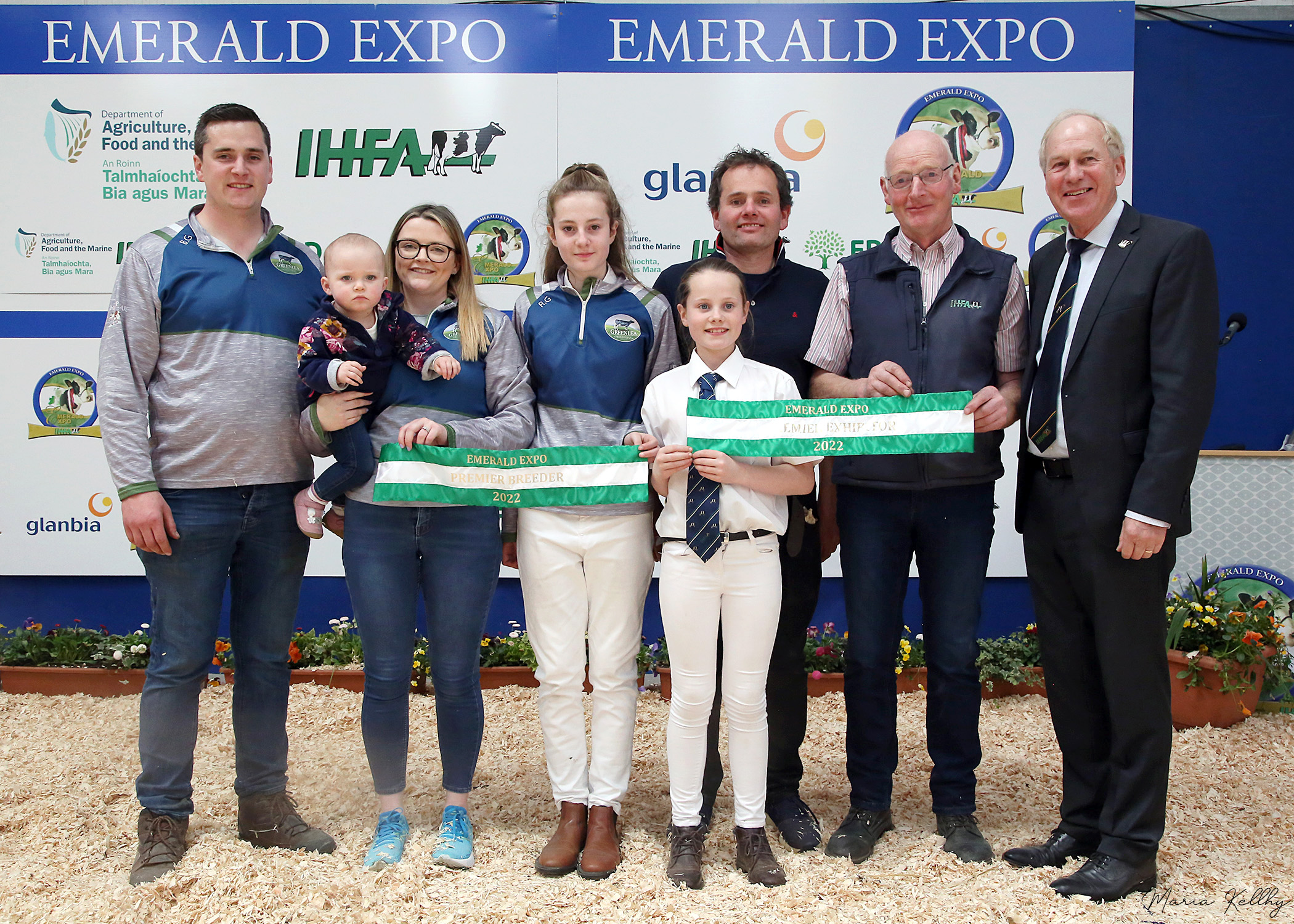 Charles Gallagher, IHFA CE thanked all exhibitors in attendance and he congratulated all involved in the show. He paid tribute to Show Director Richard Whelan and the Emerald Expo organising committee.

He said that the show marked a welcome return of focal breed-promotion events taking place in person following a two-and-a-half-year break, where members welcomed the opportunity to meet up and renew friendships.

At the show finale Richard Whelan, Show Director, made individual presentations in thanks to Eimear Gaynor, ring steward, Emcee, Deirdre Toal and to Mary Gaynor in recognition of their valuable work supporting the show.