Large crowds gather in Churchclara, Kilkenny for a showcase of Pure Friesian breeding

A large crowd in excess of 1,000 people were treated to a walk through the impressive Churchclara herd of pedigree Pure Friesian on the 19th June at the O Keeffe family farm,hosts of the Pure Friesian Open day.

Charles Gallagher, Chief Executive and Peter Ging, President of IHFA welcomed everyone to the Open day. The President remarked that the Friesian Open day was part of the IHFA Golden Jubilee celebrations, after all this was the type of cow that all dairy farmers started out with before the introduction of the Holstein. The herdbook was established in 1965.

The day began with a club stock judging with three teams of cows to include Heifers, Junior cows and Senior cows. The Judge Tom Kelly from the Monamore herd Co Louth gave a run down on the animals presented and reasons as to his choice. Tom commented on the quality of the cows and how they reminded him of the early shows at the Royal,UK and RDS. “No matter which dairy breed you are judging a dairy cow should possess those dairy traits or dairy Wedges and these cows presented today demonstrate this in abundance” Paul Boal, Field staff and Classifier with IHFA selected a cow in each class to demonstrate the conformation scoring system and how it captures longevity and functionality to ensure longlife cows.Bill gave a run down on each cow tracing the family lineage and sires without any aids, “ all in his head” The herd is classified with 60%VG/EX.

Everyone I spoke with commented on the herd, the cow performance, dairy strength and overall quality. Everyone received a great welcome and there were no end of refreshments, teas and coffee’s available all day. Bill, his father Philip and uncle Matt farm in partnership milking 200 cows Spring calving pedigree pure Friesians at Churchclara

The O’ Keeffe family have been farming at Churchclara, Co. Kilkenny since the 1600s and milk has been supplied for sale from the farm for much of that time. In fact the farm was the 10th supplier to sign up when Kilkenny Creamery was formed back in 1916. Over the years, through mergers and acquisitions, that business has grown into the largest Irish Dairy Processor, Glanbia.

The herd was originally Shorthorn based with some good Ayrshires from time to time. British Friesian genetics were introduced in the 60s and 70s and some good pedigree cows were bought in occasionally throughout this time. The farm was a mixed operation at this stage with tillage and beef a big part of the overall business. In the 1990s the herd slowly made the switch to Holstein genetics as it became more difficult to source top Friesian bulls from the UK In the late 1990s the decision was made to switch back to British Friesian Genetics if good enough bulls could be sourced.

The herd was also graded up to Pedigree at this time and some bulls were kept from the top Friesian cows in the herd to speed up the change over from Holstein to Friesian Genetics. Throughout the 2000s an effort was made to source British Friesian Genetics from the 1980s era with a preference for Gornal Pegasus and Grove Breadwinner bloodlines. These bloodlines have been found to produce healthy, dairy cows with enough size and frame for any system.

Fertility, health and longevity have all improved hugely with the herd over the past years with the introduction of more and more British Friesian Genetics and production hasn’t taken a back seat either. Last year’s annual report shows a herd producing 6057Kgs milk @ 4.22Fat and 3.62Protein with a SCC of 64, a calving interval of 367 days and 9% empty after 10 weeks breeding. The beef enterprise on the farm was still a major part of the business throughout the 1980s . Dovea were providing top class British Friesian bulls out of the UK throughout the 1980 so it was easy to stick with this breed.

Some pedigree cows have been bought in throughout this time with some exceptional additions from the Blackisle Herd in Scotland, the Castledale Herd in Co. Down and from the Hennessy Family’s Barrowcore Herd in Co. Kilkenny. The Barrowcore herd in particular provided a lot of Bull Dams to the herd in the late 1990s and early 2000s.

The Churchclara herd has recently started showing cows at Emerald Expo and Tullamore shows. There have been plenty of successes with the most notable being Blackisle Laura 68’s Pure Friesian Championship win at Emerald Expo in 2012. The herd usually performs very well in the Heifer and Junior cow classes at these shows as well.

In recent years the farm has once again been able to focus on expansion post quota and to that end the number of cows owned has grown to over 200 with some cows leased out from 2012 to 2016 to stay under quota. The plan is to milk 210 cows in 2015 and then rise to 320 in 2016 on the home farm with some additional ground leased in for 2016. The numbers of youngstock have grown rapidly over the past 3 years with 156 maiden heifers going to the bull in 2015 to help expand the herd in 2016.

The targets for the future include increasing the number of cows on the farm and also increasing the production and fertility of the herd. 7000Kgs of milk, a 5% empty rate and 8% solids or better should all be achieved over the next 5 years, without going too far over 1 ton of meal feed per cow. Martin Crowe, Chairman, thanked everyone for coming on behalf of the Irish Pure Friesian club. Martin thanked Charles Gallagher, C.E. and the staff in IHFA for their help in organising such a successful day. The Chairman also thanked Master Judge Tom Kelly and all the sponsors in particular Glanbia Gain Feeds who were the main sponsors, also trade stand holders for their support.

Charles Gallagher, C.E. thanked the family for being wonderful hosts of the event. He thanked the Pure Friesian club for their help in the lead-up to and on the day. Charles noted that the Irish Pure Friesian was very much an important element within IHFA as the Black & White breed offers wide genetic diversity. This characteristic is a major benefit of Pure Friesians in addition to reflecting the renowned easy care, dual purpose benefits of the breed. He remarked that the success of the churchclara herd is a balance of high milk solids,fertility and conformation.

Presentations were made to the O’Keefe family by Francis Fitzgerald,treasurer of the Friesian Club and IHFA president Peter Ging.

The results of the stock judging were as follows;

The day concluded with a celebration sale of 20 heifer calves and some bulls from th e top cow families in the herd.

The prices reflected the exceptional quality of the cows that were witnessed by all  on the day.
The average price was an impressive €1150 with a full clearance.
Top price was €2,300. 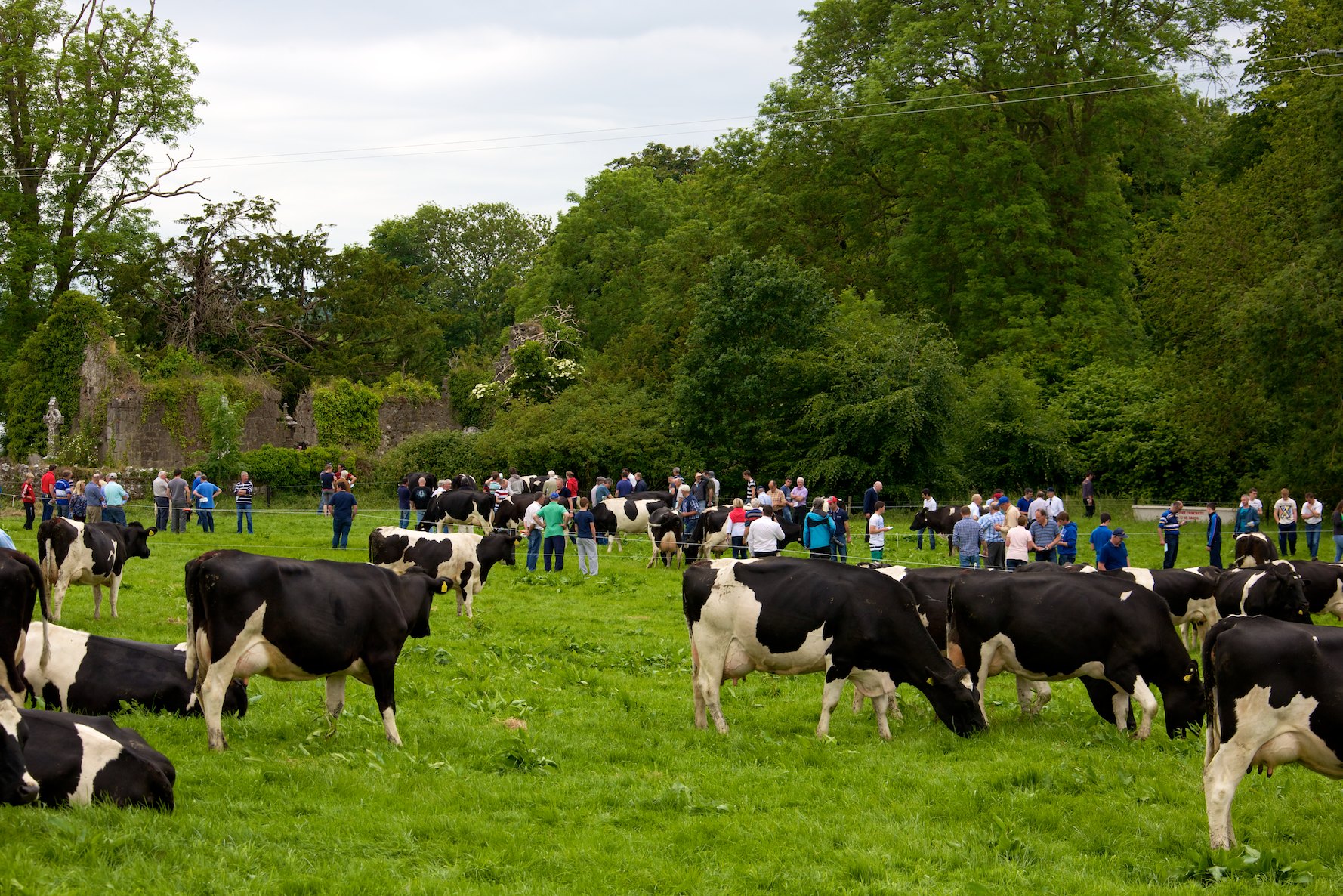 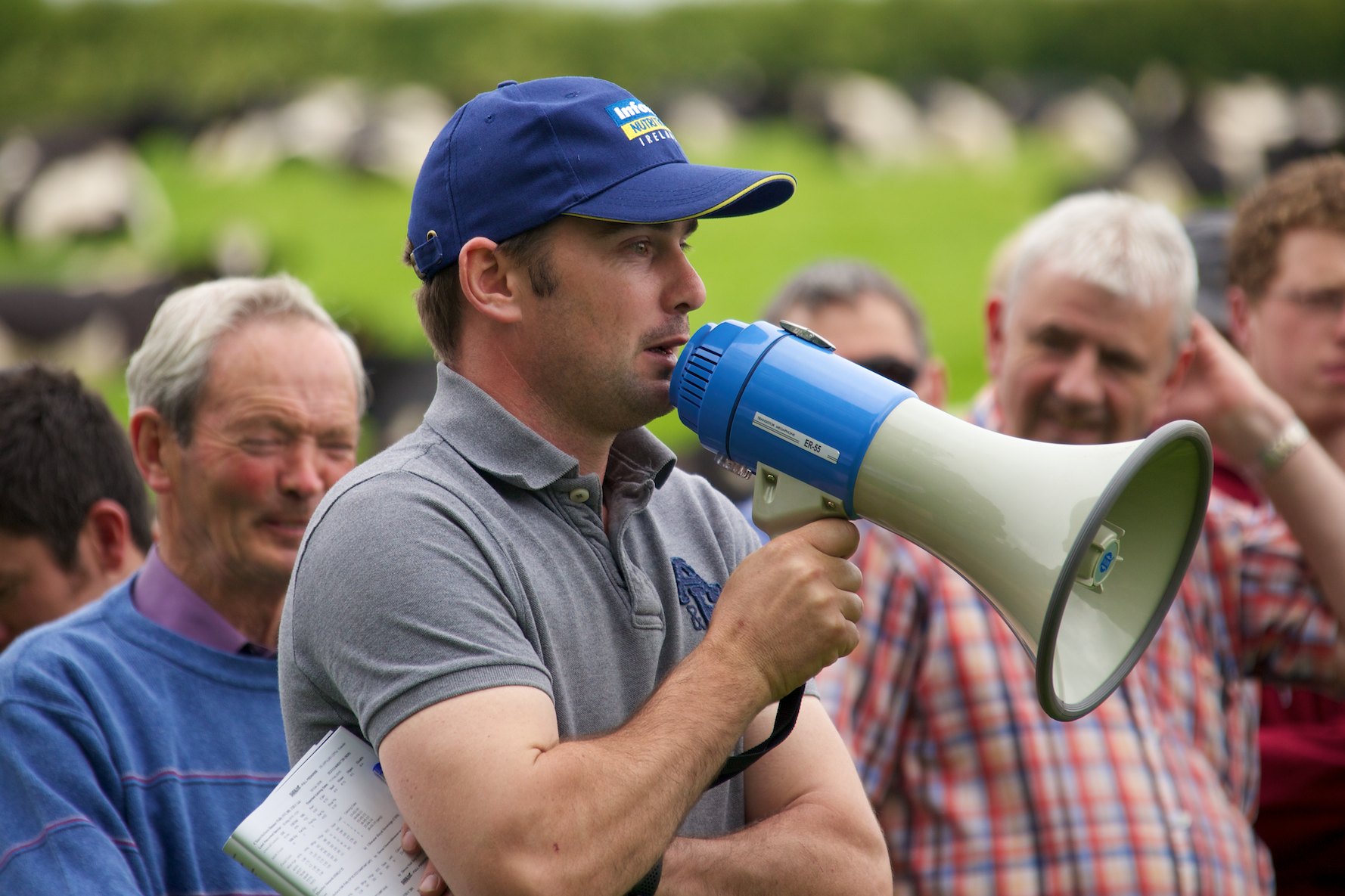 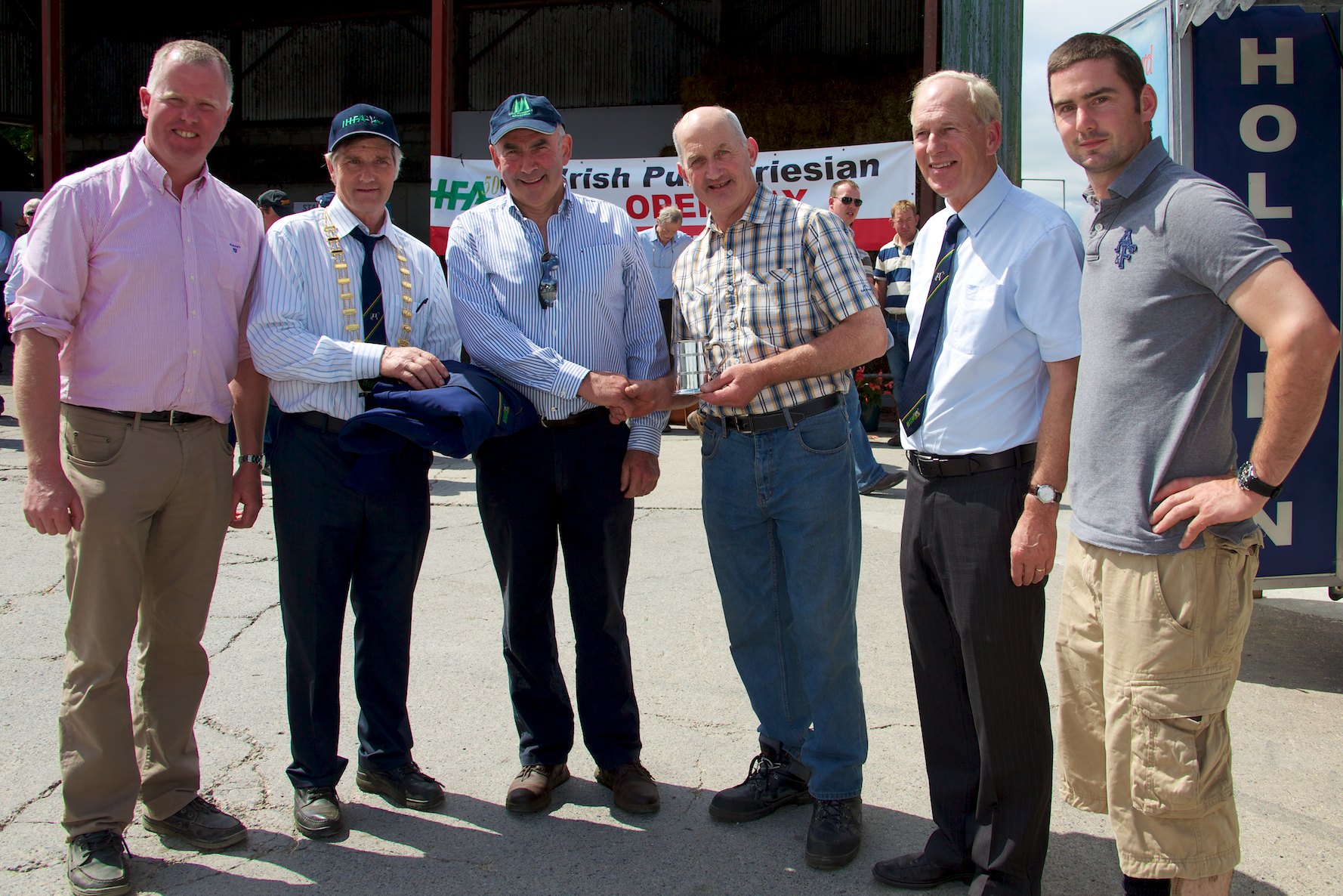 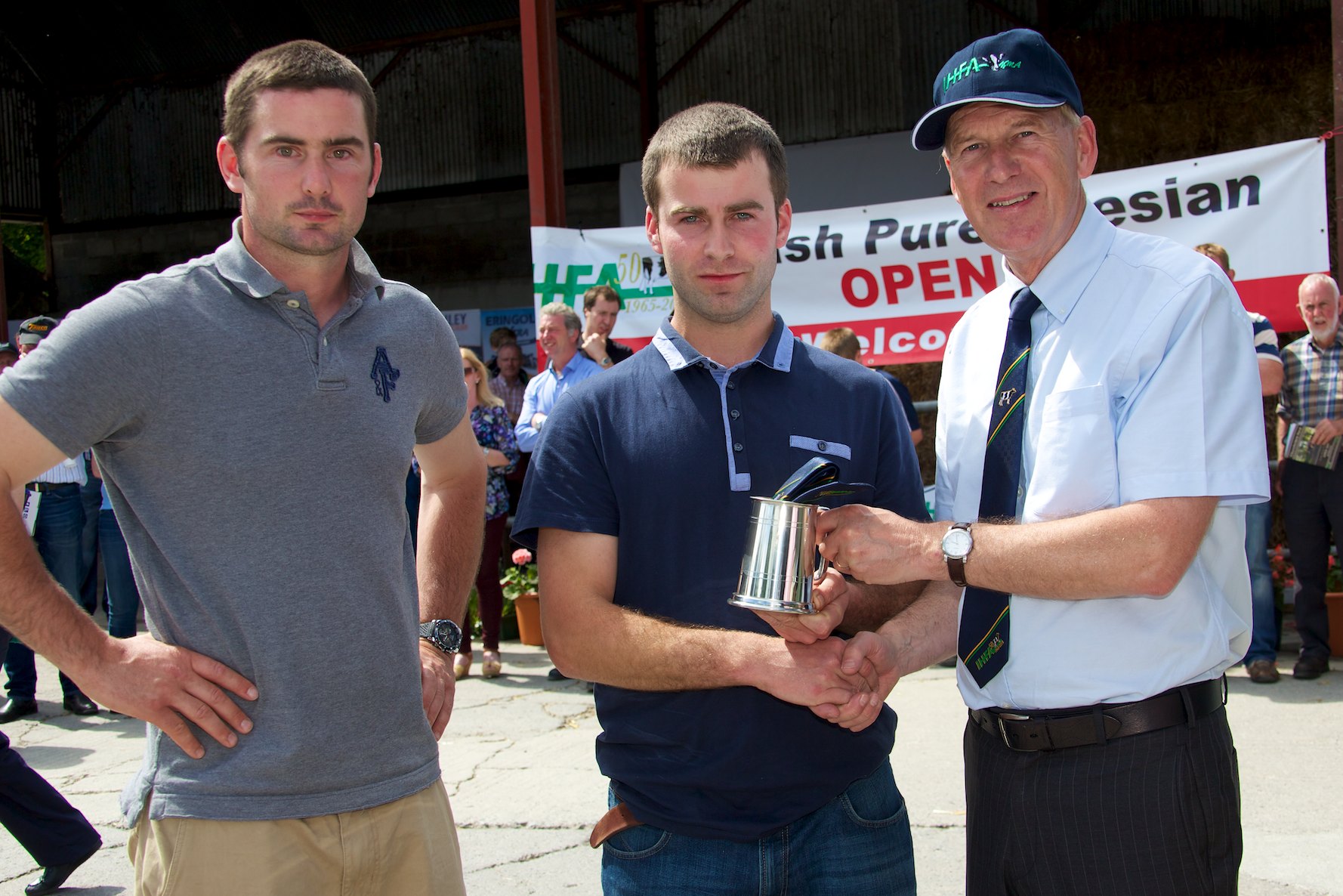 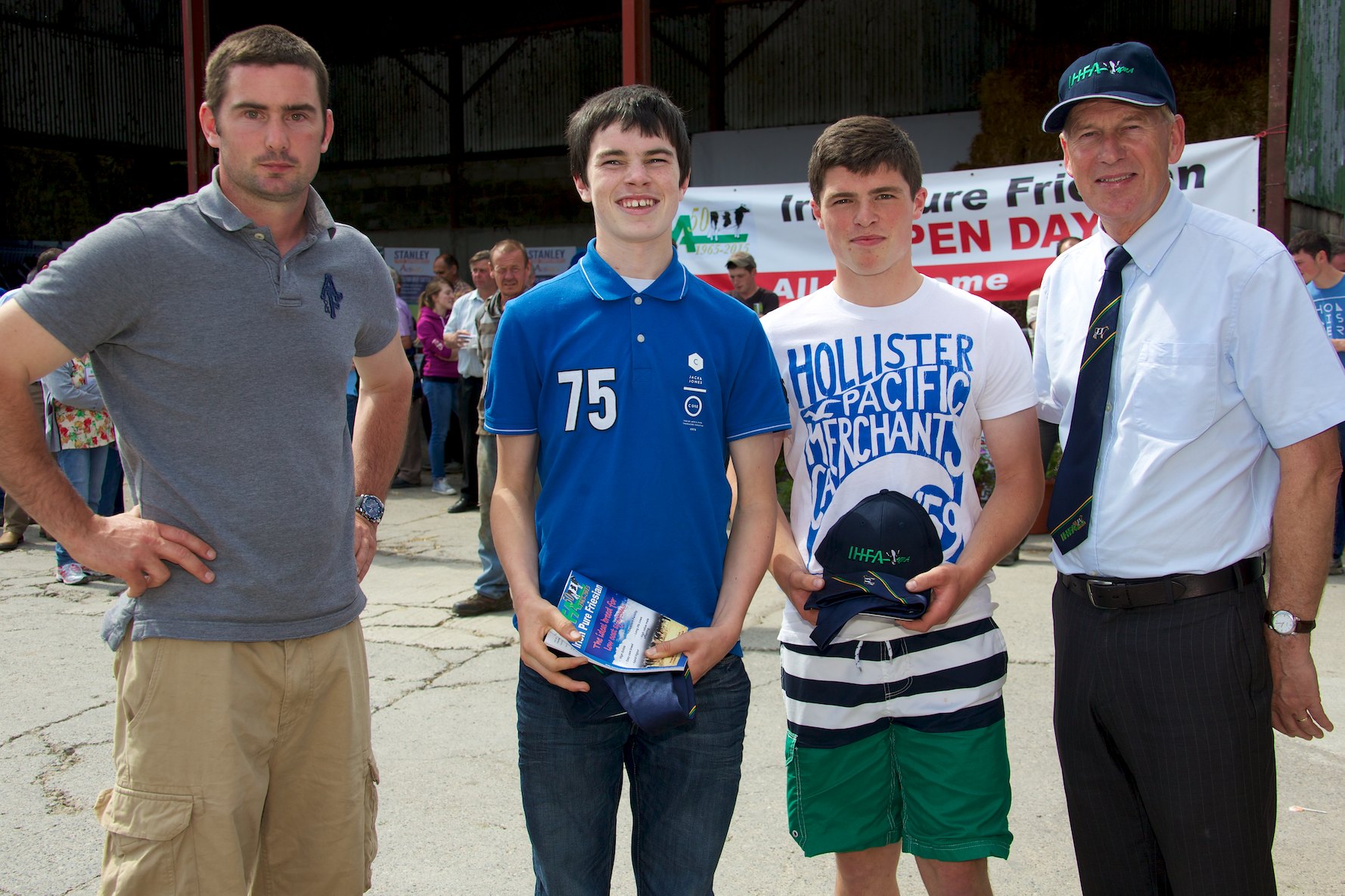