The 54th Monamore on-farm sale for Thomas, Rhona and James Kelly was held on Saturday, October 26th and conducted by Taaffe Auctions. 119 lots were catalogued comprising fresh heifers and cows, springing autumn and spring calvers and a select offering of heifer calves – the newest generation of Monamore breeding. Farmers from across the country including Northern Ireland made the journey to the Monamore herd at Philipstown Farm, Ballymakenny Road, Drogheda, Co. Louth.

Cow families synonymous with the herd were offered in the sale including Torch, Darlene, Vera, Evon, exemplifying the established home-bred lines. Allied to this strong influence is a mix of choice international families to include Ellymae, Raven, Ada, Roxy, Delia among others. 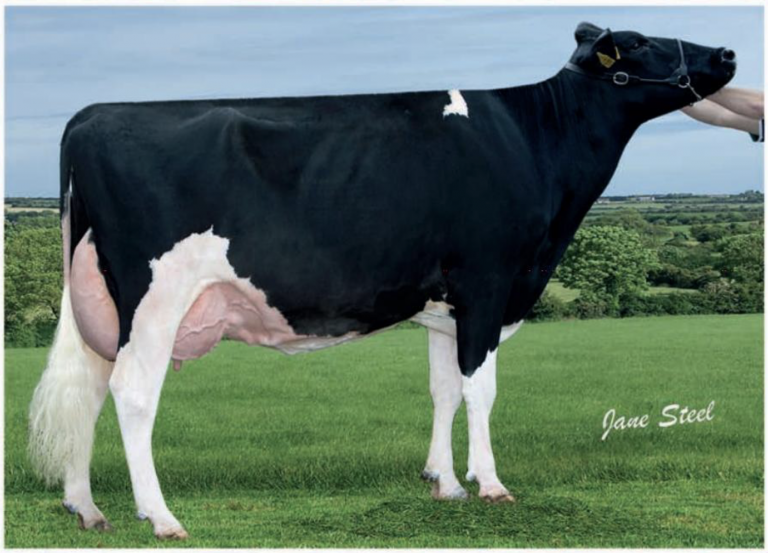 Monamore Kboy Pink Lady ET (lot 63) topped the sale fetching €6,300. She is a potential 11th generation EX (excellent) from the Apple family. She is backed by six generations of EX dams with protein to 3.50% or higher and is sired by Kingboy EX92. There are two VG86 2 year-old full sisters milking in the Monamore herd. Both are projected to record over 9,000kgs milk in their first lactations. She sold with a service date to Duckett Crush Tatoo (sexed) with an expected calving date in December.

Calved heifers averaged €2,047. Springing heifers averaged €2,395 with heifers due to calve early next year averaged €1,900. In total twenty-five lots achieved prices of €2,000 or higher. Eight fresh milking cows sold averaging €2,033 each and consisted of a mixture of 2nd and 3rd lactation cows.

Heifer calves were in big demand once again, two calves made over €1,000 each with the twenty-one calves in total sold on the day averaging €747.

An overview of some of the top prices;
•Monamore Armanis Charity (lot 27) fresh heifer, sold for €3,675, she is a potential 10th generation VG/EX. Calved since September 18th, she is currently milking 32 litres/day. Her 6th dam is Brookview Tony Charity EX97. Her heifer calf by Diamondback sold for €1,021.

•Mother and daughter Monamore Torch 386 (lot 24) and her heifer calf by ABS Mayday (lot 24A) sold for a combined €2,961. Calved since September 9th this fresh Torch heifer is a potential 9th generation VG/EX. Her VG89 Doorman Dam completes five generations of dams having protein over 3.48%.

•Monamore Torch 400 (lot 88) maiden heifer due to calve early February sold for €2,625. From the Torch family she is a potential 8th generation VG/EX. Sired by Westcoast Perseus she has a service date to Claynook Casper (sexed).

•Monamore Raven 75 (lot 92) maiden heifer due to calve early February sold for €2,520. She offered a unique combination of red & white Raven, served to sexed Conan PP (homozygous Polled) with protein in the dam line to 3.90%.

•Monamore Ottos Papoose (lot 26) fresh heifer, sold for €2,415. Described as “One of the best milkers in the herd”, she is bred from a deep pedigree Papoose family line featuring 13 generations of VG/EX dams. Her EX dam is projected to record over 10,000kgs milk, 741kgs milk solids in her 4th lactation.

•Oldrose St Louis Rena (lot 76) maiden heifer due in December, also sold for €2,310. Bred by the Collins family, Oldrose herd she was purchased at the sale held in conjunction with hosting the IHFA National Open Day 2018. She sold with a service date to Diamondback (sexed). 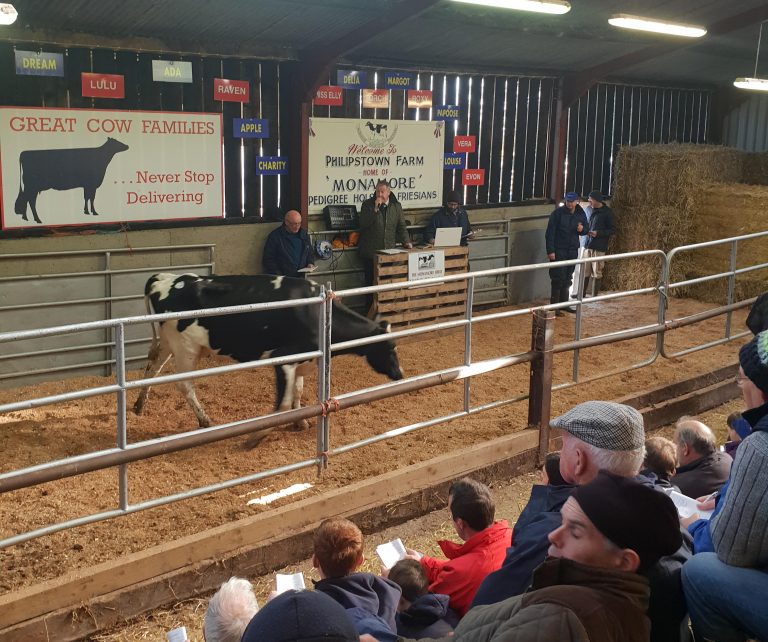 Well done to all the Monamore team involved.