Homebred cow families with an International flavour dominate at the National Dairy Show!

The 35th National Dairy Show at the Green Glens Arena, Millstreet was a resounding success amidst weather upheaval during the preceding days most acutely felt in the south west region with storm Ophelia which left many farms without electricity for many days. It is a great tribute to the resilience and support of IHFA breeders for this special show that they came out in strong numbers. It was a marvelous spectacle with exhibitors from Monaghan to Cork and everywhere in between competing for top honours.

In tapping forward Clonpaddin G Fame for Supreme Champion the Judge said “She has a world class mammary system and has a more comfortable flex to the hock. It’s no secret that I like good uddered cows. When I look at my Champion cow I really admire her veination, she has quality and width through her udder an ideal teat size and length”. 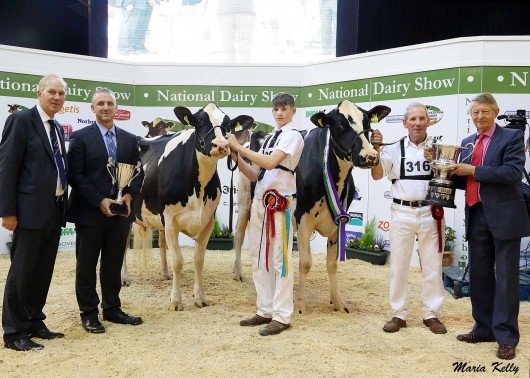 It made for a memorable journey home along the M7 towards Dublin for both John Dowling and Brochan Cocoman, near neighbours with Brochan farming at Kill, Co Kildare.

National Dairy Show Reserve Exhibitor Bred Champion went to John & Garry Hurley with their 3 year old cow in milk Clonpaddin Windbrook Fame 2ET VG88. She is by Windbrook out of a full sister to the Supreme Champion of the Show, a consistent breeding family. 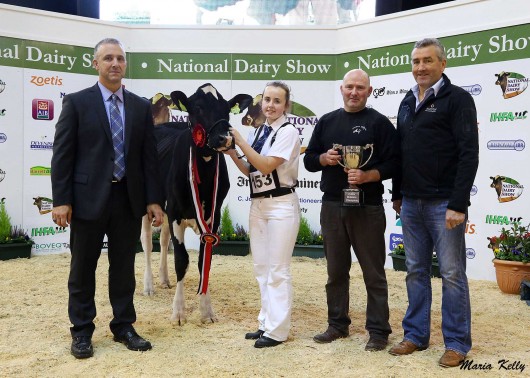 The show was officially opened by Mike Ross, who excelled himself in the Irish rugby jersey. Mike comes from a local dairy farming family and grew up having a strong involvement with the family’s Convamore Pedigree Registered Holstein Friesian herd. His father Frank is well known in the AI business, marketing French genetics.

Mike enjoyed a glittering career playing professional Rugby Union, amassing 61 caps for Ireland. Since 2009 he was the standout international player in the demanding tight-head position, a physically demanding and onerous fulcrum responsibility in locking-down the scrum. In addition to playing for Ireland in two World Cups, he won the highest trophy honours of northern hemisphere rugby; two Six Nations titles, two European Heineken cups and European Challenge cup, and two Pro12 crowns. During his distinguished club career he was capped 151 times for Leinster and also played 84 times for London Harlequins having joined from Cork Constitution.

Other dignitaries present were Minister for Agriculture Food and the Marine, Michael Creed, TD. 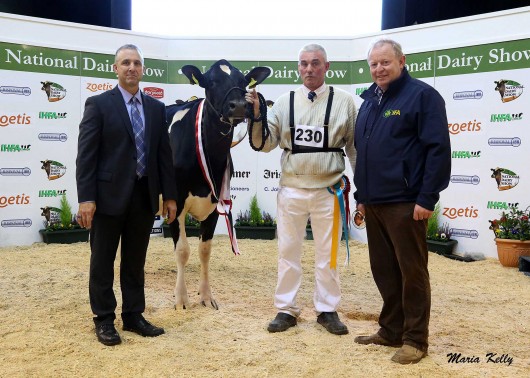 The Young Members held the final of the Showmanship League on the Friday evening with Judge Ashley Fleming from Northern Ireland doing the honours. This was a great spectacle of young people of ages 12 to 26 showing their mastery of presentation handling and showing skills. The Showmanship League is a novel competition introduced by YMA as a platform to emphasise stockmanship skills. Local shows throughout the length and breadth of Ireland are involved as qualifiers during the summer months. Owing to popularity the competition now has three classes. The standard of handling skills was exemplary; many of the competitors had won at shows. The standard was praised highly by Ashley and he complimented the Young Members on their skill levels and enthusiasm on the night. John O’ Donovan, FBD sponsors of the Showmanship Final presented the prizes;

With 49 young members taking part it is an encouraging prospect and bodes well for the future. Everyone taking part was presented with a certificate of achievement, congratulations to all.

Ashley Fleming of the Potterswalls Jersey herd is one of the top UK based breeders and recently won Champion titles at the UK Dairy Day and also exhibited the Interbreed Champion at Balmoral Spring Show. He is a renowned International Judge having judged in Australia, France and Germany. He previously judged the National Dairy Show in 2007. Ashley and his wife Lynda braved the inclement weather to travel from their Seaforde, County Down home, departing at 9am that morning.

National Dairy Show Champion Handler was won by Nikki McLoughlin with Kevin Smith taking Reserve. Judge, Brian Carscadden praised Nikki for her handling skills commenting that she led her calf as if it were her dance partner, exhibiting complimentary reactions to every step that her calf had taken. Hannah Greenan and Manus Murphy also featured in the Championship having placed 1st and 2nd respectively in the Under-12 years class. 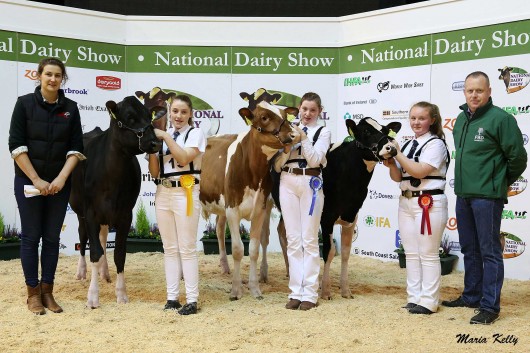 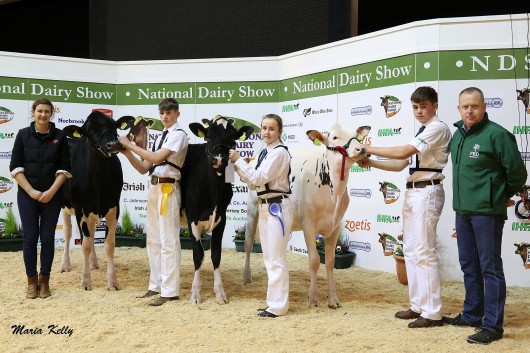 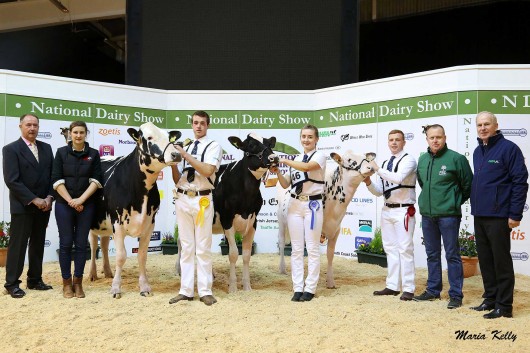 The National Dairy Show Lifetime Achievement award was presented to Tommy Finlay. For the past twenty six years Tommy has been the driving force behind the Tullamore National Livestock Show cattle classes and with the teamwork of his fellow organising committee members they have propelled the emergence of Tullamore Show into the biggest outdoor livestock show in Ireland.

Tommy has been centrally involved in dairy cattle breeding all his life, his Tarrabella Pedigree Registered Holstein Friesian herd was respected and recognised for pre-eminent breeding, he is a founder member of the Laois Offaly club and he remains ever-present at club events. His support of young members was previously recognised in being awarded the National YMA Hall of Fame.

Judge of the 35th National Dairy Show Brian Carscadden holds a judging resumé that would be universally recognised by Holstein exhibitors in any country world-wide. He is one of a very small panel of Judges to have officiated at both the World Dairy Expo (USA) and the Royal Winter Fair (Canada). From Guelph, Brian is a member of Holstein Canada’s National Judging panel and he is a sire analyst with Semex. 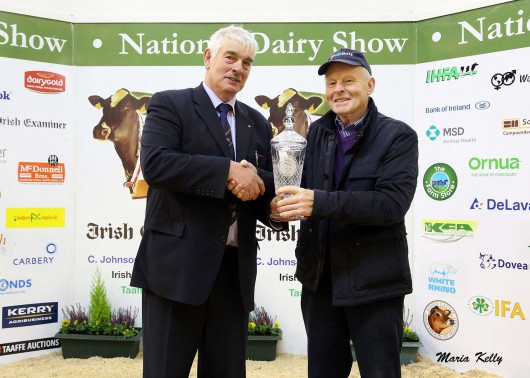 The judging was handled in a calm, controlled and assured manner by renowned judge Brian Carscadden, from Ontario Canada, who complimented all the breeders on the quality of their cows and the professional manner in which the show was organized. Great praise has to go to Show Director, John Kirby, and the organising committee, the Cork Holstein Friesian Club and IHFA staff for making it a memorable show in the prevailing conditions of storm Brian raging that morning.

There was strong competition in all the classes with the Supreme Championship going to Cyril & John Dowling of the Baldonnel herd, Co. Dublin. Cyril and John are strong supporters of the show and are unique in that they are farming approximately eight miles from O’Connell Street, Dublin. This was the second time for the Baldonnel herd to claim National Dairy Show Supreme Champion, having previously won the title in 1998. A hearty congratulations and good wishes from all present to the Baldonnel herd on their achievement with their cow Clonpaddin G Fame ET EX92. She also won National Dairy Show Best Udder.

Mervyn Eager, Evergrange, purchased hers a six-month old calf at the Clonpaddin celebration sale while hosting the IHFA National Open Day in 2011. Having calved-in with an Atwood daughter in the Evergrange herd Mervyn subsequently sold her to the Baldonnel herd with Mervyn retaining a share interest. Evergrange Atwood Fame VG87 has bred two daughters sired by Ladd P. Her lineage traces back to Moralta Inspiration Fame owned by George & Peter Kingston of the Cradenhill herd. She had attained EX97 the highest score achievable in the classification system. She also holds the unique record of three times in succession Champion of the Dairy Show in the years ‘95, ’96 and ‘97.