LISKILLA Holstein Friesian herd – A Registered herd established in 1923 with over 100 years of milk recording. 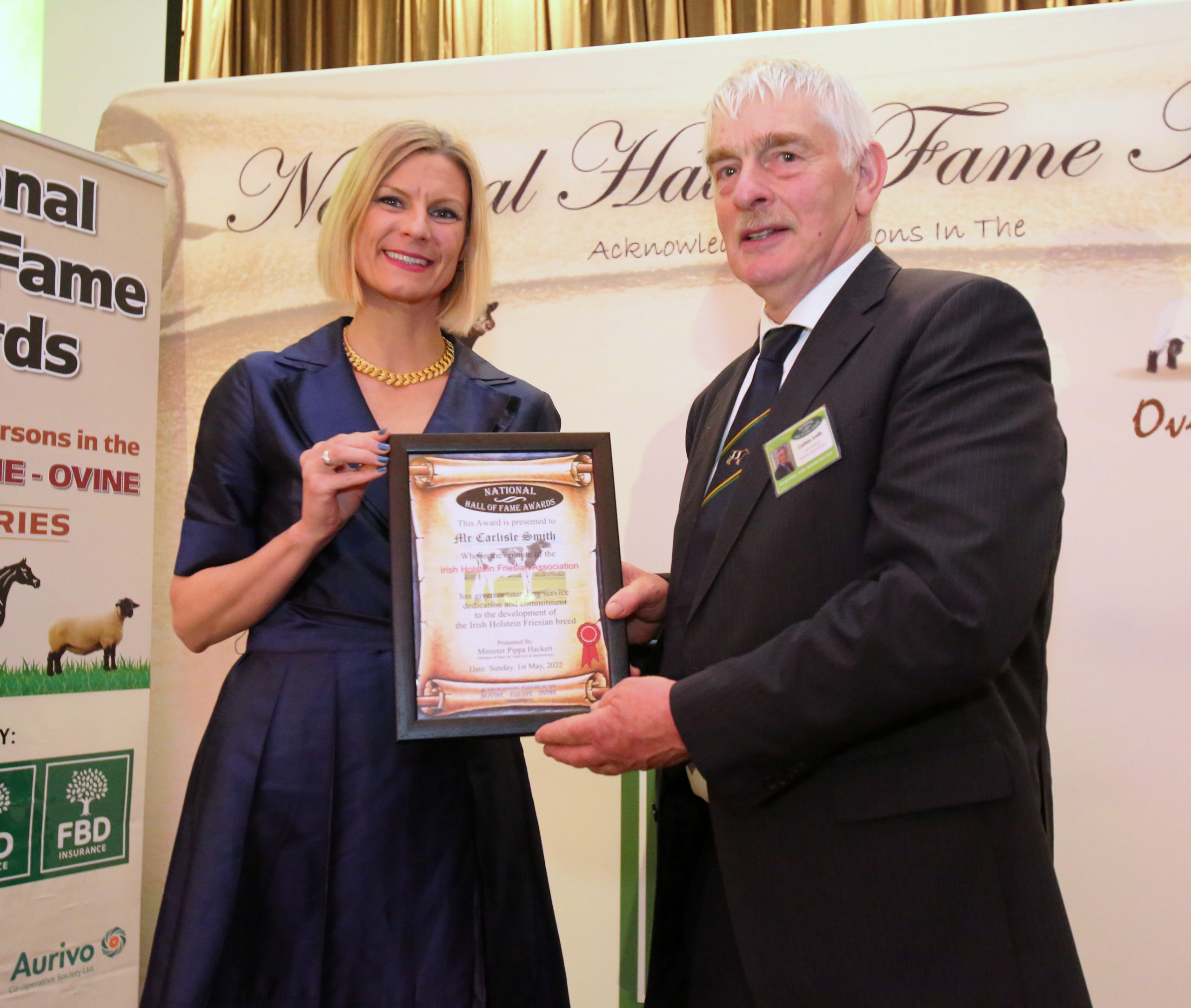 With an esteemed record of registering Pedigree animals continually every year since herd establishment in 1923 and as one of the longest established registered Holstein Friesian herds in the country, the Liskilla herd of the Smith family located in Waterfall in the South Western suburbs of Cork city is a very worthy recipient of this year’s National Hall of Fame. With nigh on a century of Registered breeding and one hundred years of milk recording, the Smith family heritage extends many generations with the torch proudly carried today by Carlisle Smith and his brother Leslie.

It was Carlisle’s grandfather William Welply Smith who established the Liskilla registered herd in 1923. The first Friesian animals were introduced into the herd this same year. An outstanding man of vision and enterprise it is known that he had started to milk record his herd in 1910. Keen to develop the herd further by adding stellar Friesian bloodlines he purchased carefully selected breeding stock from renowned registered herds in Cork at that time, such as Ms. Dinan and her brother Arthur J. Dinan of the Imokilly and Tracton herds who were among the first to register Friesian cattle in Ireland and Colonel Grove White in Doneraile. Their aim was to breed from highly regarded Friesian bloodlines from both the ‘Terling’ and ‘Lavenham’ herds in England.

A successful early result of herd breeding & selection policy was the prized bull Liskilla Jupiter who was champion at Cork Show in 1932. Achievements, awards and recognition for the performance of the Liskilla herd soon followed. The high regard for quality Liskilla breeding was Nationwide including among prominent breeders in Northern Ireland. Animals were traded to Northern Ireland, in a mutual beneficial arrangement for all whereby Liskilla females formed important breeding stock for such renowned herds as ‘Ballynanny’ and ‘Rocklyn’ herds. In turn quality breeding bulls from both herds were used as service sires in the Liskilla herd.

William’s son, Richard Ambrose Smith took over the running of the farm during the 1940’s. With scrupulous attention to breeding detail he developed and expanded the herd further. Numerous show successes were accomplished as the herd regularly exhibited at the many prominent shows including Cork, Bandon, Clonakilty, Belgooly, Midleton, Macroom, Kanturk and Limerick. Carlisle recalls these days with great nostalgia “Our cattle frequently travelled by train to Clonakilty show. We were in the very unique and fortunate position of being located so close to the local Waterfall train station, situated on the Cork to Bantry line. The station was just a few fields away. It is unheard of nowadays but we actually walked the cattle out from the field to the train station, who then travelled by train on to their destination before they were again walked the final part of the journey to the local showground. We as a family would travel by car, showing was an important day out and it was also a very pleasant social occasion, my mother always brought along her gas cannister which was a rare luxury item back then and she happily made us all sandwiches and tea which fuelled us up contentedly (and any other person who needed a cuppa got one).

The Liskilla entry of three Friesian Bulls to the annual Bull sale held at Cork showgrounds in 1957 was the sum total of all Friesian bulls on the day – reflecting the National situation of that earlier era when the Friesian breed was numerically a ‘niche’. All three bulls sold for prices of 84, 82 and 80 guineas respectively, a reflection of nascent demand for Friesian stock and also the pioneering ethos and vision of Liskilla breeding.

The trend of Liskilla Bulls commanding high prices continued further. Liskilla Air Pilot was a notable bull who sold for a very significant price of 320 guineas in 1963. He was a much sought-after breeding bull, being a son of one of the top production cows in the herd Liskilla Lyric who was yielding twelve gallons of milk a day at that particular time. Liskilla Lyric was Supreme Champion of many shows including Supreme Champion of Cork Show 1964, winning a highly competitive Championship replete with quality including both the Champions of the R.D.S. and Balmoral.

The success of Liskilla purchased stock had a wide reach in enabling other herds to establish and prosper including Lisduff, Skehana, Ardrahan, Gawsworth to mention a few. The successful ‘Ostrich’ family in the Radney herd of Henry & Liam O’ Keeffe traces back to Liskilla Ostrich whose granddaughter Liskilla Orange was Champion of Cork show in 1959 winning the 50 Year Jubilee Tankard presented by the British Friesian Cattle Society.

The Smith family’s storied association with showing was enriched further with a bequest of the ‘Liskilla Cup’ to the Munster Agricultural Show (M.A.S.) in 1960. This historical cup remains in the vaulted possession of the M.A.S. to this day. Richard Ambrose decided to donate this commemorative cup in recognition of the success of Liskilla Ocean a cow he sold to the O’Callaghan brothers of Castlewhite, Waterfall, in the late 1940s. Liskilla Ocean won the original female Champion cup outright after winning the M.A.S. Championship three years in succession.

In the early 1970’s Richard Ambrose passed away with his sons Carlisle and Leslie taking on the mantle of running the family farm. The brothers continue farming successfully together today as a partnership, adapting with the evolving times and embracing modern technology.

Carlisle recalls being aged twenty-two years and fresh out of Gurteen Agricultural college when this life-changing step was taken. Having taken part in his first show aged just six years old he had already accumulated a wealth of cattle-breeding knowledge. The family heritage of adopting best management practices continued through into the next generation and subsequent decades with Liskilla continuing to milk record and maintain Pedigree herd registrations.

Time commitments eventually led to a gradual halt in exhibiting at shows however Carlisle became deeply involved as an active member and officer of the Cork Holstein Friesian Breeders Club. He has served as a member of the club’s organising committee for over twenty-five years, a record of unstinted service. He dutifully fulfilled many roles including Club Secretary among others. Carlisle was also elected by his fellow Cork club members to serve on the National Dairy Show organising committee. His service in this regard included four years as Trade Stand Co-Ordinator. The pinnacle of Carlisle’s commitment to the Cork club and reflection of the esteemed regard that fellow members hold for him saw him nominated and elected as Club President. He has the distinguished honour of serving as Club President during the National Dairy Show’s 35th anniversary year.  The National Dairy Show is run each year voluntarily by the members of the Cork club.

Carlisle comments “I always liked milking cows and working with good stock. As the herd now approaches a feat of one hundred years of Herdbook Registrations it is a very proud achievement. Established in 1923 the Liskilla herd actually supersedes the Government of Ireland’s ‘Livestock Breeding Act’ which was introduced in 1925, an act which remained part of the Constitution until the early 1990’s.  To think that milk recording in its various guises has been practised on the farm since 1910 save for a temporary interruption during the war years, and that herdbook registrations have been maintained since 1923 it really is a very strong endorsement of breeding commitment”. All told, the history, heritage and influence of the Liskilla herd is truly remarkable.

It is fitting to pay tribute to Carlisle and his wife Olwen and their family as he is the IHFA nominee for the National Hall of Fame award 2022 in conjunction with Athlone Show. Congratulations to Carlisle & Olwen and their family; daughter Averil, her husband Shane and grandson Harvey, son Andrew and his wife Siobhan while their youngest daughter Trudy lives in Australia.