Tim Kiely is a humble man. He will not tell you of all he has achieved for the Holstein Friesian breed but don’t let his modesty mask his achievements. This thorough gentleman gets things done – and done well.

Tim inherited the family farm in Ballydaly, Co. Cork from his father in 1969, becoming the fourth generation of Kiely to work that land near Millstreet in north County Cork. Tim was extremely keen to embrace new technologies, like AI, which were becoming available to Irish agriculture. He was also quick to see the huge advantages that came with Friesian cattle and so, in 1973, he bought pedigree animals from the Brogeen and Crossmahon herds; animals that became the foundation of his highly acclaimed Brick pedigree registered herd. 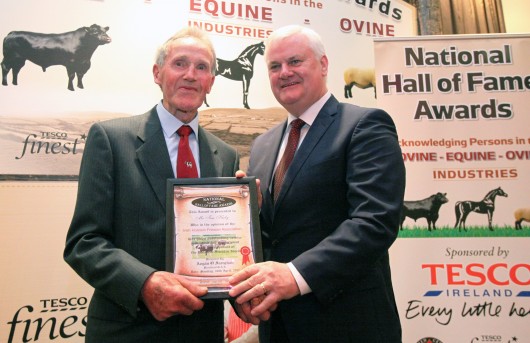 Congratulations to Tim Kiely of Millstreet herd, Cork, this year’s recipient of the National Hall of Fame Award.

Recognition of his excellent herd and farming skills soon followed. His creamery, Ballyclough Co-Op, chose Tim as the winner of the very prestigious Farmer of the Year competition two years in a row. In that second year, he capped off this remarkable achievement by winning 3rd prize in the National Final of 1983 Farmer of the Year. These winning ways still continue, with the herd most recently winning 1st place in the  IHFA National Herds Competition in the Spring Calving category

Tim had no intention of stopping there. In the early 1980s, he joined the Cork Friesian Breeders Club and has since enjoyed many field evenings, open days and trips abroad. As one would expect with his good nature, he soon made many life-long friends. Tim subsequently devoted almost as much time to the betterment of the breed as he has to his own herd: helping his club, the breed and his fellow breeders. He has held two field evening on his farm and even served as the CHFC’s President. Possibly most notably, he has also been an integral part of the National Dairy Show since its establishment in 1982. Here he has served both on the Organising Committee and as the Event Site Coordinator. His trojan contribution has helped the National Dairy Show become recognised as one of the top dairy events in Europe.

Nowadays, Tim’s son Denis runs the farm, working under the Millstreet prefix. Of the herd’s 68 cows, a staggering 20 are classified Excellent and 28 are VG.

Tim Kiely is a humble man. He won’t tell of all he has achieved for the Holstein Friesian breed – as officers of the Cork Club, we are delighted to endorse Tim for this National Hall of Fame Award 2017.