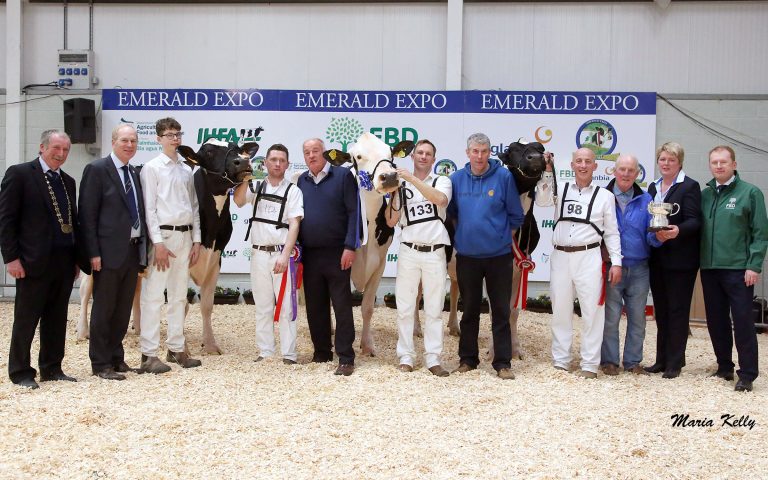 The Emerald Expo Express Sale of Youngstock was a new iniatitive, introduced as a new concept to the show. Twelve lots of youngstock backed by generations of quality breeding were catalogued for sale consigned by show exhibitors. The auction lots averaged €1,550 with a top price of €2,400 and there was a 60% clearance. Denis A. Barrett Auctions conducted the sale.Donal Riordan, FBD Insurance Head of Sales, main sponsors, hailed the breeders for their craft and complimented the display of tremendous stock on display.

Show Director Richard Whelan welcomed all in attendance to the 9th Emerald Expo. He welcomed the various dignitaries and wished all exhibitors the very best of luck on the day. Main sponsors were FBD Insurance, Glanbia and the Department of Agriculture Food & the Marine. Associate sponsors include Alltech/Keenan, Volac, Progressive Genetics, IFA, Drummonds and Specialist Nutrition. Richard re-iterated the total prize fund on offer, the quality of animals on display and emphasised the show’s many broad and diverse elements on offer to suit all dairy farmers. He gave special mention to the dedicated work of Patrick and Mary Gaynor. The impressive and spacious Virginia Show Centre was the venue, a popular destination by all who appreciate the hospitable, welcoming atmosphere and the strong community spirit that is so evident.

Helen Herd from the Hebden Herd, Lancashire, UK, was the Judge. It was her first time to judge in the Republic of Ireland. Together with her husband Gavin and their two children they milk 50 Holsteins with 75% of the herd classified in the top two categories of conformation assessment. Both Helen and her father are members of the Holstein UK National Judges Panel, a unique family achievement. Helen is a qualified Chartered Accountant, owning her own practice which currently employs twenty staff. Her previous Judging credentials include judging Balmoral Show last year.

It was the 1st Emerald Expo Championship success for father and son team Cyril and John Dowling. However, Baldonnel FM Sunshine is a prolific performer having won Supreme and Interbreed Champion at the 2018 Winter Fair and previously she was crowned Baileys Champion Heifer in-milk. She is a big production cow, projected to produce over 10,000kgs milk this lactation with 794kgs milk solids. She is classified EX90 on IHFA conformation and completes seven generations of EX (Excellent). Calved since October she is sired by Baldonnel Flashmatic, a Comestar Stormatic son bred from an EX90 5E dam.

Reserve Champion Crossnacole Atwood Precious, owned and exhibited by Victor Jackson, made quite the impression as a mature seven-year-old, one of the oldest cows at the show, exhibiting quality in abundance. She has produced 4,232kgs milk solids to date. She is classified EX94 3E with a score of EX96 for rump and EX95 on feet & legs. Victor commented to the Judge afterwards that “She is the best cow that I have ever bred”.

The Championship line-up had quality throughout and included; Barbie ET exhibited by John Moore, a grand-daughter of Regancrest PR Barbie ET EX92. She is classified EX92 and is in her fourth lactation.
Clonpaddin Solomon Flavor, a Junior Heifer exhibited by Gary & John Hurley. Backed by six generations of VG/EX dams, she is classified VG86 with a VG87 mammary.Hallow Atwood Twizzle who is VG88 2nd lactation with a projected yield of 7,500kgs milk, 593kgs milk solids. Hallow Seaver Nicol also exhibited by Philip & Linda Jones, classified VG88 in her 2nd lactation, backed by an EX93 3E dam and EX92 2E grand-dam.

Hallow Doorman Abrakazoo 2 ET exhibited by the syndicate Paul & Marguerite Flanagan, Alan Dorian and Leo Collins Jnr won the Glanbia Intermediate Championship, 1st Junior Heifer and Best Udder and she went on to also win the EBI Championship. The Termonfeckin based Flanagan family had a 1- 2 of success in this class with their Tubbertoby Doorman Joy next in line, Reserve Intermediate Champion and she also was awarded Best Exhibitor Bred Junior Heifer

There were seventeen YMA entered for the Showmanship League classes. The talents and stockmanship skills on display bodes well for a strong future of Young Breeders. It was a particularly memorable day for the Williamson family, Drumshanny, Co. Monaghan with all three girls performing exceptionally well. Rebekah was crowned Champion Handler, her first Championship success. Hannah won Reserve Champion and was 1st in her class with sister Sarah placing 3rd in the same class and she was singled out for praise by the Judge. Ingleden Goldwyn Charlie won the Volac Junior Championship, exhibited by Victor Jackson. Lynbrook Atwood Erin ET was Reserve Champion, exhibited by the syndicate of Timlin/O’Neill/Morley. Roy and Heather Cromie won Honourable Mention with Dalevalley GWY Aiko ET. 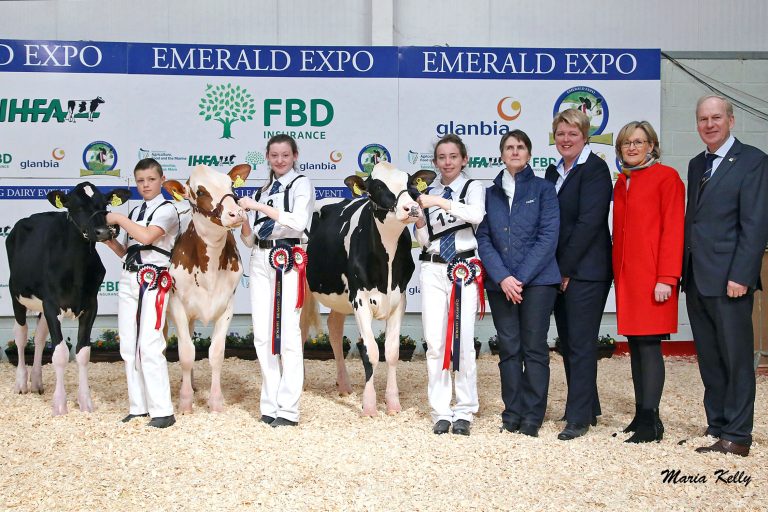 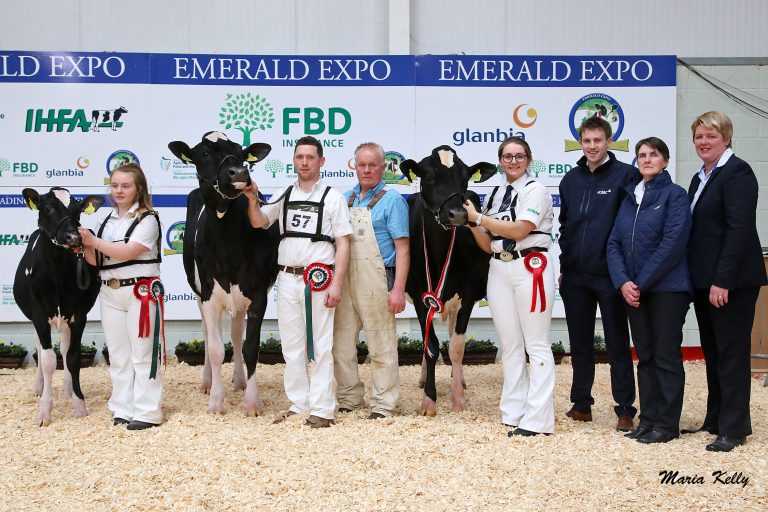 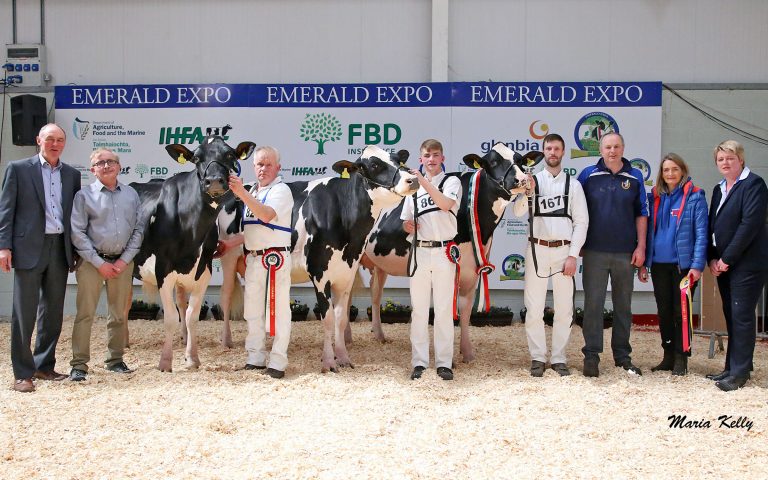 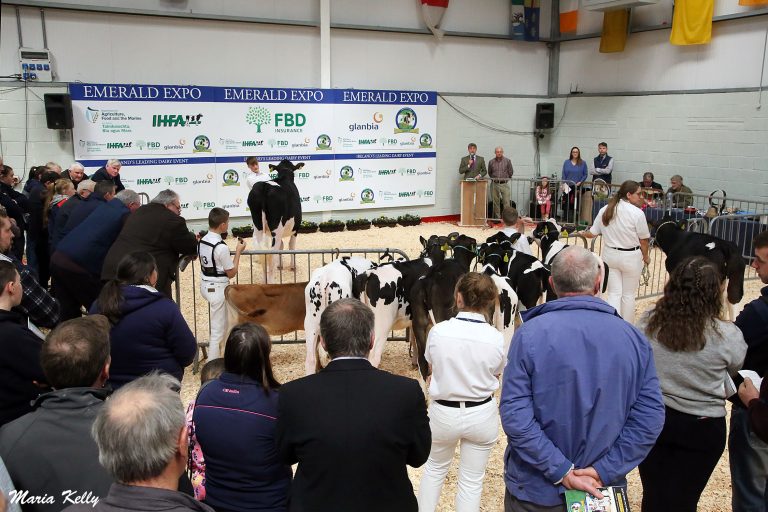 On the occasion of Emerald Expo 2019, the inaugural Expo Express Sale took place. Expo Express is a sale of young stock from deep pedigreed cow families. The sale achieved an average of €1,550 with a top price of €2,400 and a 60% clearance. Stock went to breeders either side of the border.