Brothers John and Mike manage this 140 cow pedigree herd. The fact that visitors from as far away as Northern Ireland made the journey for the day bears testament to the renown of the “Ballykennedy” herd and Irish Pure Friesian breeding. Limerick based Roches Feeds were sponsors of the day. Other trade stand holders included; Animax, ABS, Bova AI, Dairymaster, Eurogene, Farm Relief Services, Galway Homeopathics, Munster AI.
Among the large crowd was IHFA President John O’ Flynn and his wife Chrissie and members of the local and national farming press.
Master Judge for the Stockjudging competition was Bill Foster, Genus ABS. Competitors listened eagerly as Bill outlined his placings and reason giving in the Heifer, Junior Cow and Senior Cow classes. Bill complimented the quality of the animals in the stockjudging and remarked that it was a tremendous display of quality Friesian breeding. He summarised the three groups as “Promising” Heifers, “Developing” Junior Cows and “Mature” Senior Cows. Bill noted that these and the rest of the Ballykennedy herd were a tremendous exhibition of Irish Pure Friesian breeding.                                     John followed up by outlining the breeding and cow family background of each animal with concise and detailed information.
Francis Fitzgerald, Secretary of the Pure Friesian club thanked the O’Connor family for hosting the Open Day. He acknowledged the quality of the herd and commented that the family had worked extremely hard in getting the herd to its current level. Pat Donnellon, ICBF, used examples from the ICBF database to outline average breed statistics highlighting clear fertility and longevity benefits conferred by Friesian sires. Local Teagasc Newcastlewest advisor Tom O’ Connor spoke about the performance of the herd in terms of milk solids production, calving performance, grass growth and reseeding. He commended the tremendous fertility performance of the herd, evidenced in the fact that 85% of the herd calved in a 6 week period in 2013.
Martin Crowe, Chairman, thanked the O’ Connor family on behalf of the Irish Pure Friesian club. He recounted that the family have always held a special affinity for Friesian breeding ever since since Mike Senior established a milking herd in 1983. Martin thanked Charles Gallagher, C.E. and the staff in IHFA for their help in organising such a successful day. The Chairman also thanked Master Judge Bill Foster, and commented that Bill is a wonderful exponent for Friesian breeding.
Charles Gallagher, C.E. thanked the O’ Connor family for being wonderful hosts of the event. He thanked the Pure Friesian and local Limerick/Clare clubs for their help in the lead-up to and on the day. He acknowledged the contribution made by Dermot Cahill, who was present on the day, who maintained the pure Friesian genetics amidst the trend of the time when many breeders were adopting Holstein breeding. Charles noted that the Irish Pure Friesian was very much an important element within IHFA as the Black & White breed offers wide genetic diversity. He remarked that the introduction of calf values into the EBI formula would be a benefit to Friesians in reflecting the renowned easy care, dual purpose benefits of the breed.
Presentations were made to the O’ Connor family and the results of the stock judging were as follows;

Irish Pure Friesian Club Chairman Martin Crowe, IHFA President John O’ Flynn and Chief Executive Charles Gallagher were welcomed by the O’ Connor family to their pedigree Friesian herd for  a press launch this week. In attendance were representatives from sponsors Roches Feeds, Eurogene AI Services, Dairymaster,  Dovea Genetics and personnel from farming organisations I.C.M.S.A. & I.F.A.
Brothers John & Michael have built up the herd from the founding work of their father Mike Senior who established a milking herd on the farm in 1983. Two herds were amalgamated, with the milking herd currently at 150 cows. Average production in 2012 was 1,400 gallons, 4.25% Fat and 3.59% Protein. Their is excellent use of grazed grass in the diet with 85 % of the herd calving in 6 weeks from mid January.
Brothers John & Mike are members of the “Pathfinders” discussion group. Tom O Connor from Teagasc, Newcastlewest is the local Teagasc Advisor.
Attention to detail is a hallmark of this herd.  John’s dedication to better breeding has progressed the herd over the years.  The foundation for the current Ballykennedy herd was laid in the purchase of the “Leitrimeast” herd and some exceptional cows from the “Kilsunny” herd near Dovea. Further interesting additions to the herd include 4 females from the recently dispersed “Blackisle” herd  in Scotland, stockbulls from the” Langley” herd near London and “Castledale” herd in Co. Down. The “Lyselle” family has also been added through embryo work which added a lot to the herd in terms of udder quality and milk solids. Older Friesian bloodlines have been followed where possible to bring dairyness and frame to the “Ballykennedy” herd.
Progress in the performance of the herd has been aided by the adoption of milk recording, A.I.,  pedigree registration and herd classification service from IHFA. A recent classification inspection resulted in 11 EX, 29 VG, 15 GP and 3 Good conformation scores. Every year there is a good surplus of calved cows and heifers for sale. Bulls are attracting a lot of interest from surrounding dairy farmers. Some stockbulls from the herd have done exceptionally well for other breeders in both pedigree and commercial herds.
The Open Day will consist of stockjudging and the opportunity to walk through this herd of top-quality Friesians. A number of trade stands will be on display. Refreshments will be served.

Everyone is welcome to attend on July 5th. The farm is located a short distance from Ballingarry village, just off the Newcastlewest/Kilmeedy road, approx 22 kms from Charleville and 12 kms from Adare. 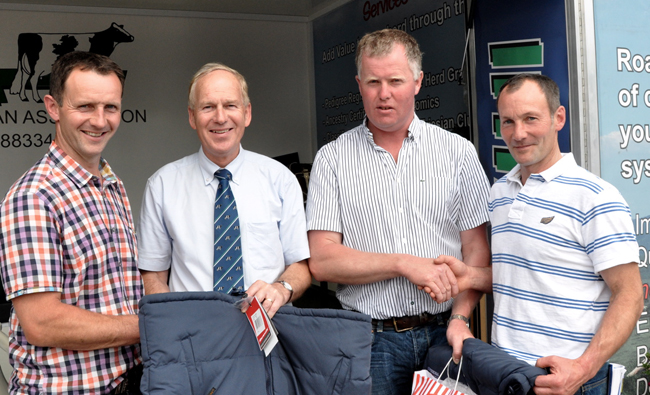