Two dairy awards were announced and presented at the ICBF Genetics Conference on January 17th 2020. Both winning herds are IHFA member herds. This is a further strong endorsement for Holstein Friesian genetics and efficiency of performance within the herdbook. From a shortlist of top performing herds nationally, the Carraig and Callinafercy pedigree registered herds emerged as respective category winners. Donal Carey provides an outline of both award-winning registered Holstein Friesian herds. 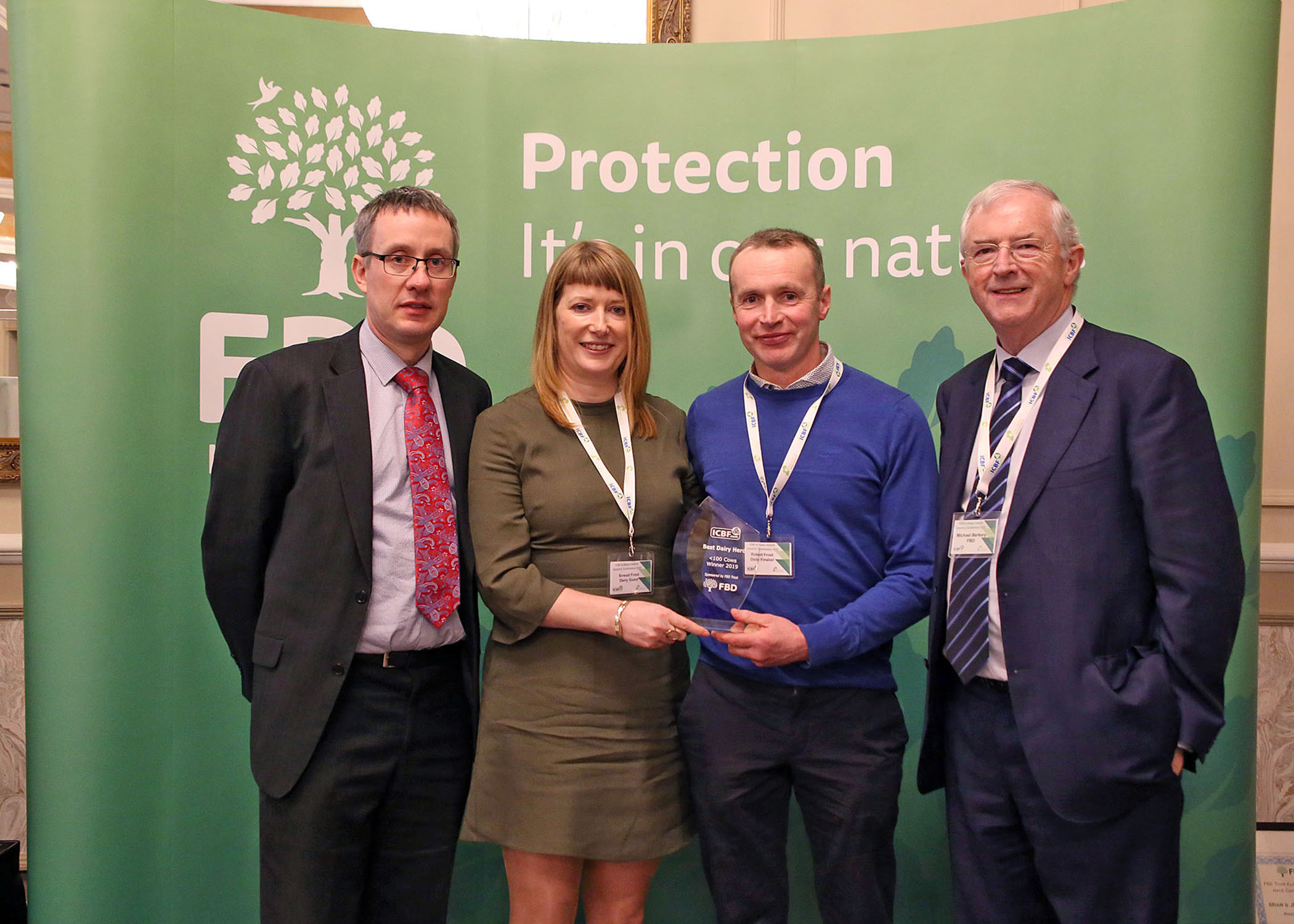 Winner of 100 cow herd & under category

Farming in the south east of the Banner County, the Carraig herd is home to Robert and Sinead Frost and their son Ruairí (aged 8), daughters Saoirse (aged 6) & Eanna (aged 4), with Robert’s mother Eileen also helping out on the farm. The herd consists of 80 milking cows, all spring calving with a total farm acreage of 100 acres.

Compact calving herd with tremendous fertility performance. The calving pattern breakdown per month in 2019 was 90% within eight weeks. Just 6% of all cows and heifers were empty following the 2019 breeding season.

47% of the herd consists of cows in 4th lactation or older. This is a very sizable proportion and reflects longevity in abundance within the herd. Longevity means less replacements are required with a further gain from higher performance of mature yields. These mature cows had a milk recorded average performance of 8,100kgs milk, 3.96% fat, 3.56% protein, 609kgs milk solids (305d) SCC of 70.

Robert’s late father, Gerard, sowed the seeds for modern and progressive dairying at Killanena, having always adopted many pioneering technologies and practices. Milk recording and the use of AI commenced in the early 1980s. Robert has built on this heritage and he continues the strong tradition to help add value to the herd and the farming system.

Robert comments “Pedigree status puts it in black and white, literally. It is a herd status which gives unique assurance of traceability. It is the only effective insurance policy available for cows. Grading up the herd to pedigree was an easy decision, it was the next logical step to take in moving the herd forward. The herd had accumulated a vast depth of records over so many years, combining milk recording and breeding. I decided a number of years ago to remain loyal to the breed and to continue to select from within to keep moving forward. Thankfully, over time this decision has been proved correct”.

Robert states that herd breeding policy is informed by benchmarking the herd’s performance with best available research. This includes applying various herd and individual performance reports. All heifer calves born are genomic tested every year for a number of years now. When a shortlist of AI sires is decided upon, Robert then finds it useful to research the lines of breeding behind each sire.

He comments “It’s especially encouraging to select a bull with high figures on predicted genetic merit which is backed up by generations of consistent performance in his dam, grand dam and so on. The sire stack can be very informative in painting a picture of anticipated performance.”

With a nod to continued self-improvement, Robert’s aim for the year ahead is to further hone his grassland management skills. A member of Pasture Base, he plans to ramp up involvement in the programme by interacting more frequently with measuring and inputting grass growth measurements.

Winner of over 100 cow category

130 cow, compact spring calving herd in the Kingdom of Kerry.

A lifetime of committed policy to breed cow conformation to suit the individual farming system is certainly paying dividends for the McCarthy’s Callinafercy herd. Having taken over the farm on a full-time basis from his late father in 2001, Eoghan continued to breed for the traits deemed most desirable and important for annual performance.

Eoghan explains “My father used all AI breeding, no stock bulls. Historically the RBI, as the national index of that earlier era, tended to dominate the discussion around breeding. However, my father never placed emphasis on RBI. Instead he relied on his own stockmanship instinct for breeding decisions. The block-calving aspect of our herd coupled with a significant beef enterprise required a broader range of traits emphasis.”

Eoghan explains “There has been much better compatibility with EBI as a breeding index suited to the herd and the purchase of additional quota in 2007 in conjunction with the cessation of the beef enterprise, brought herd performance up through the gears, progressing to new levels. The Holstein Friesian breed has been the mainstay of the herd throughout. It is my policy to use only pedigree status sires, in a breeding policy that continues with 100 % AI usage as in my father’s time.”

The overall performance and quality of the Callinafercy herd is such that three bulls have been purchased by AI breeding companies to date; Callinafercy Sonny (FYC), Callinafercy Donald (FYO) and Callinafercy Lester (FR2235).

The family farm is described as quite wet overall with half the total area under sea level. Soil fertility is a key aspect with regular soil testing carried out with reseeding, liming and targeted fertiliser application strategies adapted as such. Grassland management and grazing performance is to a very high standard demonstrated by the fact that average meal feeding last year was 700 kgs/cow.

The calving pattern breakdown last year was 88% of all cows calved within eight weeks. A very successful 2019 breeding season resulted in an overall pregnancy rate of 92%. The tremendous fertility performance allows inherent longevity to manifest. A knock-on positive benefit is that the requirement for replacements coming through each year is reduced, opening up a revenue stream of surplus heifers offered for sale. Over 40% of the herd consists of cows in 4th lactation or older. The recorded performance of these mature cows last year averaged 7,327kgs milk, 4.40% fat, 3.69% protein, 593kgs milk solids (305d), SCC 48.

For Eoghan, fertility performance is a result of not only breeding for fertility traits but also relies upon good management – a healthy, balanced herd and a targeted heat detection strategy with accurate records maintained and actioned.

Eoghan credits the success of the herd to making informed decisions. The diversity and choice within the pedigree Holstein Friesian panel of AI sires is scrutinised to identify the best fit genetics ahead of the breeding season. Positive culling on performance is a key strategy. The many reports available are referenced in taking informed management decisions.

Since 2012, all heifer calves are routinely genomic tested. The benefit according to Eoghan is that it brings more consistency to bull selection. “This works really well in my system. Test AI bulls were always used to a certain extent in the herd over many years. Having genomic information on both sides of the mating means that the G.S. sire is allocated more specifically than ever before. A check for inbreeding percentage is also applied. As such the herd now relies on genomic sires entirely.” Eoghan continues, “The approach used is to pick a team of 7 or 8 bulls, never fewer, and this reliability approach helps guard as much as possible against inferior performance. Also, the policy is to broaden the genetic lines using no more than two bulls bred by the same sire. In my view this balanced team approach is essential when using genomic sires.